The Dangers of Hidden Mercury

What you can do to protect yourself against mercury poisoning

An Interview with Dr. Jane Hightower

Dear Doctor: You have brought much more awareness to the public and health professional community. Tell us about the impact of your book “Diagnosis: Mercury.” 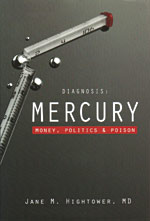 Dr. Jane Hightower: The book tells the story of mercury; it's been a compelling “CSI” story, with good guys and bad guys. Many people both in government and in public health either didn't know, or forgot how the allowable limit of mercury in fish was derived. The data that was used to decide the allowable mercury level in fish was obtained from a massive poisoning that occurred from 1971-1972 in Iraq. My book is the first to put together the political nature of this massive and under-reported poisoning together with the scientific literature, and then tie it into how it affected policy and health. The FDA lost a court case on regulation in 1977, prior to which 0.5 mcg/g* had been the allowable limit. The industry wanted to change it to 2.0 mcg/g, but ultimately a compromise of 1.0mcg/g was reached in the court decision. The American Medical Association (AMA) did not have anything “on the books” so I wrote a resolution to recognize methylmercury as a hazard in food. The resolution was passed by the San Francisco Medical Society, the California Medical Association, and finally the AMA in June 2004. Regulation of mercury is an ongoing problem and is not strongly enforced. For example I recently had a popular food product tested, which had very high levels of methyl mercury.

Dear Doctor: Dear Doctor's main focus is oral health as it relates to general health. Please talk to us about mercury in dental amalgam. 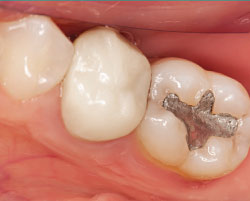 Dr. Jane Hightower: The main issue with mercury is when it is in the methyl-mercury form, an organic form that can penetrate every cell in the body, although the inorganic forms are also potentially dangerous. Modern dental amalgam fillings contain about 50% mercury, but it is bound in an amalgam together with silver, copper, tin and other trace metals. The concern is to prevent mercury (and other metals) from leaching out and getting into other areas of the body. The dental community has been working on a way to prevent leaching for a long time. As long as the mercury is not vaporized and doesn't leach out into the body, it may be as safe as other plastic resin materials, which may also have their problems.

Dear Doctor: What about other metals, do you see any other safety issues medically, allergy for example?

Dr. Jane Hightower: Of all metals, nickel is the most reactive for humans in causing metal allergy. Again, some people are more sensitive than others, so there is always a range of response. It's the ones that have more exaggerated responses that inspire us to do the research to find the cause.

Dear Doctor: On a personal level, can you talk some about your experience with dentistry?

Dr. Jane Hightower: I wasn't exposed much to dentistry as a child, consequently at 19 years old I ended up with a lot of amalgam fillings. At the time, some dentists used amalgam to fill and even prevent decay in the tiny crevices of teeth where it starts. I had my amalgam fillings for over 30 years but the growing health concerns regarding mercury prompted me to finally start removing them. I did it over a three-year period. While I did not feel any urgency to do it all at once, I also felt it was no longer a good idea to leave them in.

They were replaced with glass ionomer (fluoride releasing) fillings. I also have a couple of gold crowns. I do go to my dentist regularly and believe in preventive care. Dentistry has come a long way, both in approach and the materials used. Dentists and physicians need to continue to be diligent in listening to their patients, and demand good research for the products they prescribe.

Dear Doctor: There is a lot of information today about the connection between systemic (general body) disease and oral (gum) disease, the main connection being inflammation. Do you talk to your patients about oral health as it relates to general health?

Dr. Jane Hightower: Absolutely, it all ties in. I believe in preventing inflammation and keeping the mouth and body in an “anti-inflammatory” state. My basic thrust is to maintain the integrity of the detoxifying systems by not polluting the body in the first place. Good diet, exercise, sleep and prevention are all critical — and listening to my patients when they tell me something is wrong. I believe in being an advocate for my patients and their general health, including oral health. Prevention is a good place to start.