The actress and host of The Biggest Loser talks about caring for her teeth, raising healthy kids, and the conversation that changed her life 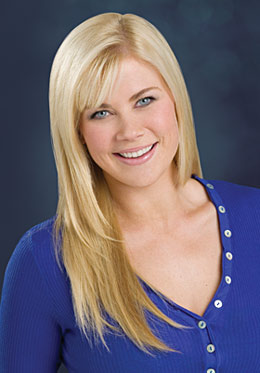 As host of the hit television series The Biggest Loser — not to mention award-winning actress, author and mother — Alison Sweeney inspires many to better health and fitness. Improving the lives of the show's contestants and fans is a role she relishes. But her own motivation to take a giant step towards living better in her early twenties did not come from a highly visible celebrity; it actually came from her dentist.

During a frank discussion about tooth decay, Alison's dentist explained to her how oral health is the gateway to general health, and how both have a common enemy — sugar.

“It was such an eye-opener,” Alison recently told Dear Doctor. “I didn't think I ate that much sugar.”

Her dentist brought to light all the foods Alison was eating that might be harming her teeth and at the same time adding unwanted pounds — soda, “honey flavored” cereals, and lots of bread and pasta. “My dentist spelled out for me what constitutes “sugar” in all its forms, and because he was approaching it in a different way — the effect that sugar has on the body besides weight — I was probably way more receptive than at any time before,” she said.

Alison's dentist explained to her how oral health is the gateway to general health, and how both have a common enemy — sugar.

Alison's dentist explained to her how he kept his own carbohydrate consumption under control by eating lots of fresh fruits and vegetables. He also mentioned that other patients had followed suit and lost a significant amount of weight.

“I figured I'd give it a shot, and it really paid off,” she reports. “I stayed with my dentist until he retired, and he always takes good-natured credit for my fitness!”

Of course, Alison herself also deserves a lot of credit for her openness about her struggles with weight and self-image. The Los Angeles native virtually grew up in front of the camera, landing her first part in a TV commercial at age 4. As a daytime television star, playing the role of Sami Brady on Days of our Lives from the age of 16, her ups and downs on the scale were very public. And, Alison believes, representative of what a lot of young women deal with every day off-camera.

“Being on camera was no different than what the other girls I knew were facing, perhaps just more magnified,” Alison recalled. “The good news is that I think I found a way to really spin the situation to the positive, both for me and the fans who related to what I was going through.”

Choosing to be forthright was Alison's way of dealing with constant public scrutiny at a sensitive time. “Since Days of our Lives filmed 50 weeks a year, there was no ‘off season’ for me to hide behind,” she said. “I decided pretty early on to just be honest about what I was dealing with, how I was feeling. I figured a lot of people would identify with me and maybe it would help other girls to know we're going through the same things.”

Now that she's a 34-year-old mother of two young children, Alison is hoping to lend that same kind of support to new moms. Her recently published book, The Mommy Diet, offers a new take on parenting advice.

“The Mommy Diet, unlike most books for moms, is focused on helping the mom take care of herself,” Alison explained. “While I did get into detail about pregnancy and post-natal weight loss, I think the book is filled with useful information for anyone who needs help getting themselves in shape, and committing to spending that time on their own health.”

To some new moms, that can seem easier said than done. But the key is pacing, said Alison. Her rallying cry is, “One step at a time!”

“Don't set unrealistic expectations that will make you feel as though you've failed,” Alison elaborated, “but also, don't ignore your body and your reflection in the mirror for too long so that you feel helpless about doing something.”

Continue to the next page to read more about Alison Sweeney.