The Future Of Dentistry

A Sneak Preview Of Your Dental Future 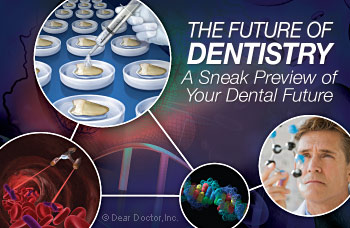 We are already experiencing enormous changes, and the 21st Century will surpass even the immediate past for remarkable advances in the human condition. The decades just ahead promise an avalanche of scientific and technological discoveries, as well as economic, social, and political changes on a scale never experienced before in human history. The biological and digital information revolutions are rapidly converging with clinical dentistry as they are with medicine and pharmacy.

For example, can you imagine the day your dentist will grow you a real tooth to replace one that has been lost? Prescribe medication tailored not only to your ailment, but also your genetic code? Protect babies from tooth decay before they even have teeth? It's not as far off as you might think. The dental profession is at the threshold of amazing new discoveries. As these 21st Century technologies become available, it will become equally as challenging to make sure people in all walks of life benefit from this extraordinary surge in knowledge.

Lose A Tooth — Grow Another

The possibilities sound almost miraculous: growing new enamel, dentin and cementum — all the parts of a tooth — and even complete teeth themselves, using one's own saliva to diagnose and determine risk for disease, devising new ways of using biological materials to judge the effectiveness of treatment, and creating new tests to determine who is at risk for diseases and disorders. These innovative diagnostics, therapeutics and biomaterials, coupled with tissue engineering, will come from an increased understanding of human and microbial genomes — the entire makeup of these organisms' genes. And they will all be available in your dentist's office!

We also will continue to see advances in “digital dentistry” — computer assisted radiography (x-rays), aided by “nanotechnology” — manipulating matter at the molecular or even atomic level. New, better, and smarter technology will continue to emerge and influence the practice of dentistry and the depth and breadth of oral health education. The public, too, will become more sophisticated in understanding the processes of prevention and treatment through access to the Internet and other sources of information.

The past 50 years have seen more change in science and technology than the previous 500 years, and those 500 witnessed more advances than the previous 5,000. The rate of change is enormous, and this is reflected in the resulting biotechnology applied to healthcare. James Watson and Francis Crick discovered the structure of DNA, the “parts list of life,” in 1953, over half a century ago. Subsequent work by Rosalind Franklin unraveled its structure, the now famous double helix, and suggested its functions. Franklin also suggested rules for its replication and the “expression” of genetic information — how characteristics of life come into being, in essence how to read the code. This moment in history, transformed biology into an “information science;” since then, the flood of knowledge has only increased. The past decade has seen the complete sequencing of the 3.5 billion bits of information that constitute the human genome, followed by a more thorough understanding of the unity of genetics throughout the world of microbes, plants, and animals.

We humans contain approximately 21,000 genes encoded within 23 pairs of chromosomes located within the nucleus of every cell in the body. Today, we know that the largest genetic variance between any two people on the planet Earth is less than 0.1%. We can now detect subtle differences or variations in genes that can help us spot diseases or monitor therapy. In tandem, hundreds of microbes (viruses, bacteria, and yeasts) have been redefined in terms of their genomes. The genetic sequences of animals ranging from fruit flies to philosophers have also been decoded — and they even share many of the same genes!