The Future Of Dentistry

A Sneak Preview Of Your Dental Future

The National Library Of Genes

Our discoveries about human, animal and microbial genomics (the cataloguing of their genomes) reside in complex databases within the National Library of Medicine (nlm.nih.gov). All human diseases and disorders are “genetic” — the result of either single gene errors, multiple gene mutations or “misspellings,” and multiple gene to environment interactions such as those that characterize chronic diseases including cardiovascular (heart and blood vessel) diseases, cerebro-vascular (“cerebro” – brain; “vascular” – blood vessel) diseases, osteoporosis (“osteo” – bone; “porosis” – sponge-like), arthritis (“arthr” – joint; “itis” – inflammation), auto-immune diseases (“auto” – self; “immune” – resistance system) in which the body's defense system attacks its own tissues, periodontal (gum) diseases and many more. The genomes of hundreds of bacterial species that live within biofilms on tooth surfaces, in dental bacterial plaque, and on dental implant surfaces have now been sequenced. These human and microbial genomic databases are the “new frontiers” for discovering effective drug therapy.

For example, the bacteria Streptococcus mutans is one of the major bacteria associated with dental caries (tooth decay). We now know that strep mutans is transferred from caregiver to infant during the first few years of life. Genomics will help us devise ways to prevent this transfer; we can target gene therapies to inhibit pathways within bacteria themselves that regulate acid production — a by-product of sugar metabolism causing tooth decay. We can even target the “discrete killing” of one species of bacteria within the oral biofilms. These possibilities sound as if they come straight out of science fiction, but they are completely realistic. 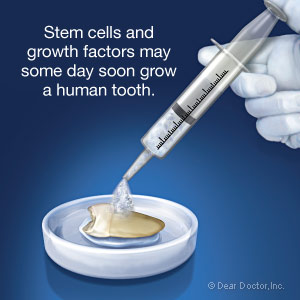 Building Blocks Of The Future

Taking another approach, we can utilize stem cells, the building blocks that can develop into various types of specialized cells — along with producing nature's own growth factors and other scaffolds encoded within the human genome — to grow a replacement human tooth. Tooth regeneration has become a scientifically valid goal for the near future. How amazing to consider that enough scientific knowledge now exists to encourage and justify the pursuit of tooth regeneration, a logical next step beyond current dental implants!

These rapid advances in science and technology offer boundless possibilities to dental professionals. They will also be a challenge to the dentists of tomorrow. New methods of treatment will no doubt require a restructuring of dental education. The current four-year curriculum is not sufficient to prepare a 21st Century dentist. Adding a required fifth year in mentored, community-based programs would enable us to increase access to care, reduce oral health disparities, and increase clinical competencies of tomorrow's graduates.

What We're Really Made Of

All life is made up of cells. There are about ten trillion cells in the human body. That's 10,000,000,000,000! Each cell is a small factory, which contains a control center, the nucleus. The nucleus of each cell is made up of 23 pairs of chromosomes, one part of the pair derived from your mom, and the other from your dad. The chromosomes are chains of proteins to which the genes are attached; they contain the code for the units of heredity, the characteristics that are passed from one generation to the next. Each gene is attached to a long chain-like molecule called DNA — deoxy-ribose-nucleic acid, that's the double helix shaped structure to which four bases — A (adenine), T (thymine), C (cytosine), and G (guanine) — are arranged in sequences that determine what each gene is and does. Stem or progenitor (“pro” – first; “genitor” – beginning or generative) cells specialize into tissues. For example, some become bone, others form the brain, blood, and liver, all making up the entire organism. Cells can also become nomadic, as within blood or the immune (resistance) system.