Exciting New Technology Can Detect Cancer And Other Serious Diseases

If you have ever given any thought to your own saliva (and don't feel bad if you haven't) you might have realized that it helps you to chew and swallow your food, and makes your mouth feel moist and comfortable. It can even protect you from tooth decay. But there is so much more to this ordinary oral fluid. Saliva, as it turns out, has hidden secrets — it contains a multitude of information about the body's state of health and disease. In fact, we are entering a new era in which saliva will help us detect the deadliest forms of cancer before it is too late; an era of salivary diagnostics.

Like blood, saliva contains proteins that hold genetic information (RNA and DNA), the inherited material that imparts the instructions for reproducing every type of cell in the body. Scientists can identify various abnormal conditions if they know which proteins to look for — information that can in many instances be gleaned from a sample of a person's blood. There are many reasons, however, why it would be preferable to sample saliva if at all possible. Saliva is far easier and cheaper to collect and doesn't expose healthcare workers to blood-borne diseases. It is also simpler to handle because it doesn't clot, and requires less manipulation. Furthermore, it's possible to diagnose conditions by using saliva outside of a doctor's office with less laboratory time and less cost, attractive for screening not only individuals, but also whole communities or populations — for health and disease.

Several tests that use saliva are already on the market. Three years ago, the U.S. Food and Drug Administration (FDA) approved a product called OraQuick for detecting HIV-1 or HIV-2, the virus that causes Acquired Immune Deficiency Syndrome (AIDS). The test, which is sensitive to anti-HIV antibodies (proteins made by the body's immune resistance system) both in oral fluid and blood, indicates the result by one or two colored lines, similar to a home pregnancy test. The FDA authorized the use of OraQuick in clinical settings, but future versions may be sold over the counter. Viruses causing hepatitis (“hepat” – liver; “itis” – inflammation), some hormones including estrogen and testosterone, and cortisol (one of the body's main mediators of stress) — are all detectable in saliva. 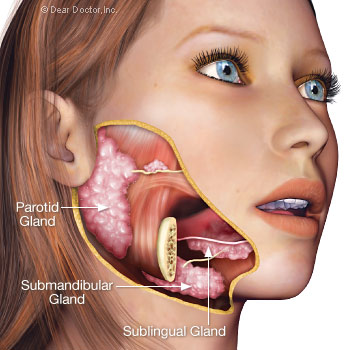 Mirror Of The Body

Saliva comes primarily from three major pairs of glands — the parotids (in the cheeks), the sub-mandibular (under the jaw) and the sub-lingual salivary glands (under the tongue) and about six hundred tiny glands throughout the mouth. In them, specialized cells take up water, salts and large molecules from the blood, mix them with a cocktail of saliva-specific proteins and secrete the resultant concoction. Hence, most compounds found in blood are also in saliva, leading to the saying that saliva is the “mirror of the body.” It's a mirror that reflects the levels of natural and artificial substances, including both legal and illegal drugs. Saliva can also indicate emotional and hormonal status, the health of the immune (resistance) system, neurological (nerve) conditions, nutritional deficits and metabolic (bodily function) states.

So how do we unlock the secrets of saliva? There are two major issues.

The first is to identify what scientists call “biomarkers” — molecules that correspond to a particular disease or condition. In other words, you have to know what you are looking for in the body fluid you are testing. As mentioned above, saliva does contain such biomarkers. They are usually proteins, DNA or RNA molecules that contain genetic codes. Some of this RNA is what's known as “messenger RNA” (mRNA). Cells use mRNA to convey the instructions in DNA for the manufacture of proteins.

In my laboratory, we have had success identifying mRNA molecules in saliva that are reliable indicators of two diseases that affect the mouth — oral cancer and Sjögren's syndrome, a common autoimmune disease. We have also branched out from the mouth to discover mRNA biomarkers in saliva for diseases in other parts of the body, such as pancreatic, lung and breast cancer. We've also found evidence that salivary biomarkers support the detection of type-II diabetes.

The second step is to build a small and sensitive machine that will detect tiny quantities of target molecules. With the support from the National Institute of Dental & Craniofacial Research (NIDCR) we have developed a prototype device that would enable an investigator or clinician to detect proteins or RNAs in a sample of saliva without needing a roomful of instruments.