Untreated Gum Disease Can Allow Other Diseases to Flourish 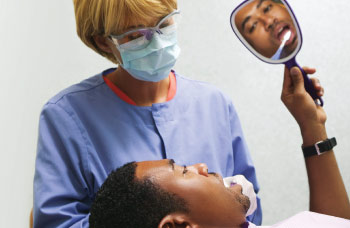 More and more, scientific studies are showing that how well you care for your teeth and gums affects other parts of your body — and vice versa. In other words, the benefits of proper oral health care extend way beyond a pretty smile!

There’s a growing appreciation for the delicate balance that exists between the various organ systems. One subject of particular focus is the relationship between periodontal (gum) disease and other health conditions.

Periodontal disease (“peri” – around; “odont” – tooth) is actually a group of disorders that affect the gums, the bone beneath them, and other surrounding tissues — in short, everything that connects us to our teeth. They are caused by dental bacterial plaque (biofilm) that collects at the gum line in the absence of effective daily oral hygiene. In severe cases, the resulting breakdown of periodontal tissues can be equal to an ulcer the size of an adult palm. But, since the ulceration is within the gum tissues, you can’t see it. Yet it makes it easy for bacteria and toxins to enter the bloodstream, where they have systemic (whole-body) effects. When you consider that nearly half of all American adults suffer from some form of gum disease and 13% have significant periodontal breakdown, you may begin to see how periodontal disease can affect systemic conditions and vice versa.

In fact, ailments as wide-ranging as cardiovascular disease and diabetes are increasingly being linked to gum disease. There is also evidence that giving birth to preterm, low-weight babies may also be tied to oral health problems.

Presently, direct cause-and-effect relationships between periodontal disease and these other maladies are not always clear. However, evidence from epidemiological studies, which measure the distribution of diseases in large population groups, reveal probable connections. Let’s take a closer look.

Insulin is a critically important hormone that helps turn sugars (carbohydrates) into energy that can be used by the body’s cells. When the pancreas does not produce enough insulin, or the body does not respond normally to the insulin that is produced, a condition known as diabetes develops. High levels of sugar accumulate in the blood, which can have increasingly serious health consequences primarily affecting blood vessels and therefore many systems of the body. About 26 million people, or a little over 8% of the U.S. population, suffer from various forms of the disease.

Studies have found evidence to support a clear association between diabetes and periodontal disease. One common factor they share is inflammation. This is normally a protective reaction but in this case it is not; on the contrary, it can make both conditions worse. For example, poorly controlled diabetic patients appear more susceptible to infectious diseases, including periodontal disease. Additionally, they have an exaggerated inflammatory response to the bacteria that produce periodontitis. Evidence also suggests that uncontrolled periodontitis can worsen blood sugar levels. The good news is that treatment of periodontal disease, by and large, has been shown to have beneficial effects on blood sugar control, which is how doctors measure diabetes treatment effectiveness. For example, a 2012 joint European-American periodontal workshop found that basic mechanical periodontal therapy (good oral hygiene and professional cleaning) improved blood sugar control to the same extent that adding a second drug would have.

Analysis of data suggests that those suffering from periodontal disease have a far greater risk of either developing or having cardiovascular disease. The American Heart Association, recognizing that more study is needed in order for a link to be validated, has called for additional research in this area. Some researchers, however, question this cautiousness, since at least some evidence already points to associations between gum disease and some forms of cardiovascular disease.