Untreated Gum Disease Can Allow Other Diseases to Flourish

Proper oral care must be part of any mother-to-be’s health regimen. It has been shown that acute oral infections, chronic abscesses, and similar potential sources of toxins have the capacity to harm the developing baby. Therefore, prompt and thorough treatment of periodontal disease is critical at any stage of pregnancy. Fluctuating hormonal levels can compromise the body’s ability to resist disease and make women more sensitive to the effects of oral bacteria, which is why so many (estimates range from 30% to 100%) experience “pregnancy gingivitis” — an inflammation of the gum tissue.

For these reasons, there is widespread acceptance that the presence of periodontal disease during pregnancy can lead to an increased health risk to both mother and developing baby. Studies have further shown that women with severe periodontal disease during pregnancy can increase the possibility of very early, preterm birth even in an otherwise healthy mother. Unfortunately, even proper treatment of gum disease may not prevent problems at birth. Periodontal therapy, however, is highly recommended. Efforts to prevent inflammation should begin as soon as a woman reaches her childbearing years. Careful attention to education and maintenance of oral health must be emphasized, particularly if a woman is or wants to become pregnant.

Both osteoporosis (“osteo” – bone; “porosis” – sieve-like) and periodontitis involve bone loss to a significant degree. In osteoporosis, which is hormonally induced, bone density is diminished. In periodontal disease, bone is lost due to bacterially induced inflammation and infection. While some studies support the notion of a link between decreasing bone mineral density (BMD) in postmenopausal women with periodontitis and related conditions, other studies show no such support, or only a weak association. Interestingly, studies of postmenopausal women treated for osteoporosis have indicated that possible side benefits of the therapy included reductions in some of the conditions associated with periodontal disease. For example, low doses of the antibiotic doxycycline have been shown to have positive effects on osteoporosis as well as bone loss associated specifically with periodontal disease.

There is one possible connection between osteoporosis and periodontal health. A class of drugs called bisphosphonates may affect the success of bone regeneration after tooth extractions, and therefore tooth-replacement with implants. The impact of this class of medication varies among individuals. The length of time on the particular bisphosphonate, other medications, i.e. steroids, and overall health status may impact bone healing. Decision-making regarding placement of a dental implant, oral surgery or periodontal therapy may be impacted when there is a history of bisphosphonate use.

Because so much of the air we breathe passes through the mouth, it is easy to understand how easily potentially harmful oral bacteria can enter the lungs. This is of special concern in nosocomial pneumonia, a type of pneumonia that is acquired by high-risk patients during a stay in the hospital. The problem is made worse in situations where individuals have increased oral biofilm buildup, such as in intensive care units and nursing homes. Simple improvements in oral care have been shown to significantly lower the occurrence of lung disease.

Similarly, improved oral hygiene is effective in the treatment of bacterial pneumonia that is not acquired in a hospital setting. Additionally, it appears likely that improvements in oral care can contribute to a decreased incidence of chronic obstructive pulmonary disease (COPD).

Rheumatoid arthritis (RA) is a disabling and painful condition that can lead to substantial loss of mobility if not properly treated. An autoimmune disease (in which the body’s defense system is no longer protective, and is in fact destructive), RA may affect many tissues and organs throughout the body, but it principally attacks flexible joints. There are an estimated 1.5 million U.S. adults who have been diagnosed with RA. 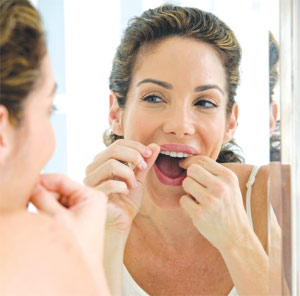 The belief that there may be a link between RA and oral infections was first raised nearly two centuries ago. There are three phases of RA as the disease develops, and their progression is quite similar to what we see with periodontal disease. Patients newly diagnosed with RA have also been found to exhibit a high prevalence of periodontal disease, even at a young age. However, there is no evidence that treating periodontal disease has a positive effect on RA disease activity and more work is needed to determine the extent — if any — to which RA and periodontal disease are related.

Clearly, there is evidence that relationships exist between a number of well-known diseases and periodontitis. While further research is needed to reveal the exact nature of the connection, inflammation is a common feature. It is eventually hoped that by increased adoption of something as relatively simple, low in risk, and inexpensive as improved oral care, a number of highly prevalent and serious conditions can be better managed, and, perhaps, more effectively treated.

In the meantime, it is unquestionable that early diagnosis and treatment of periodontal disease and other oral infections will help ensure your overall health. As one former Surgeon General said, “You can’t have general health without oral health.”