Two Diseases with a Common Enemy... You! 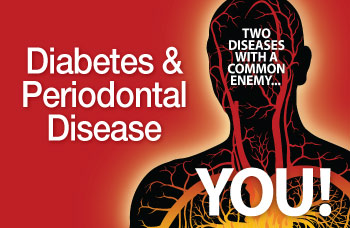 Periodontal (gum) diseases are inflammatory conditions that were once thought to have affected the mouth alone. Emerging evidence has changed this view and now suggests that periodontal diseases may play a role in numerous conditions that impact systemic (general) health and well being, including diabetes.

This review examines the relationships that exist between periodontal diseases and diabetes, the potential common pathways and disease causing mechanisms including those associated with inflammation, altered immune (resistance) responses, and insulin resistance.

Periodontal inflammation is associated with an elevated systemic (general body) inflammatory state and an increased risk of major cardiovascular (cardio-heart, vascular-blood vessel) events such as heart attack and stroke, adverse pregnancy outcomes such as low birth weight and preterm births, and altered blood sugar control in people with diabetes. Research shows that periodontal therapy which reduces inflammation can have a significant impact on systemic (general body) inflammatory status. Evidence also reveals that periodontal therapy is associated with improved blood sugar control in many patients with both diabetes and periodontal diseases.

Two Diseases With A Common Enemy — You

Both diabetes and periodontal disease are chronic inflammatory diseases that have a major impact on the health of millions of people worldwide. Evidence consistently reveals that diabetes is a risk factor for increased severity of periodontal disease and conversely periodontitis is a risk factor for worsening blood glucose control in patients with diabetes and may also increase the risk of diabetic complications.

You are more likely to develop type 2 diabetes if you:

Diabetes — More Than A Spoon-Full of Sugar

The term diabetes usually refers to diabetes mellitus and derives from ancient Greek meaning “to pass through urine.” It results in abnormally high blood glucose levels due to a combination of hereditary and environmental causes. Glucose, the “sugar” that is the body's primary energy source is controlled in part by the hormone insulin, made by an organ called the pancreas. Diabetes develops due to a diminished production of insulin as in type 1 diabetes and/or resistance to its effects as in type 2 diabetes and gestational/pregnancy diabetes. All may lead to hyperglycemia (hyper-excessive, gly-glucose, emia-blood levels) responsible for the acute signs of diabetes: excessive urine production, resulting thirst and increased fluid intake, blurred vision, unexplained weight loss, lethargy, and changes in energy metabolism. This is especially true of type 1 diabetes, which was once called insulin dependent diabetes.

Diabetes and obesity rates in North America have been increasing substantially over the last 20 years. There are over 23 million people with diabetes in the United States alone and over 170 million worldwide. According to the American Diabetes Association, there are about 6 million people undiagnosed and about 41 million people who have a condition called pre-diabetes, many of whom will progress to have type 2 diabetes in the future. About 5%-10% of diabetes cases are type 1, the rest being type 2. Diabetes mellitus prevalence increases with age, and approximately 23.1% (12.2 million) of Americans age 60 and older have diabetes.

Diabetes can have many severe consequences. Acute (sudden) complications may occur if the disease is not adequately controlled resulting in coma and death. Serious long-term complications are generally attributable to micro-vascular (micro-very small, vascular-blood vessel) damage and other consequences of high blood glucose levels on normal body function including an altered response to inflammation and wound healing — the body's primary responses to infection and trauma.

Adequate treatment of diabetes, as well as increased emphasis on blood pressure control and lifestyle factors such as stopping smoking, maintaining a healthy body weight and exercise help reduce the risk of most of the chronic complications.

All forms of diabetes have been treatable since insulin became medically available in 1921, but there is as yet no cure. People with type 1 diabetes require insulin for survival, while type 2 diabetes is managed with a combination of exercise, dietary treatment, medications and often insulin supplements.