Dear Doctor,
I had periodontal surgery 8 years ago and have been seeing my periodontist regularly since then. I am religious about my cleanings and I brush and floss daily. Despite this I still have some significant periodontal pockets and a few teeth are loose. I'm being told I should start to think about implants, but they're expensive. What should I do? 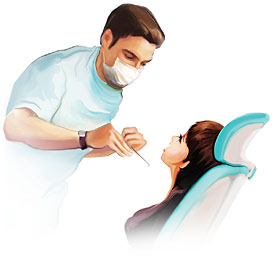 Dear Sharon,
These comments and concerns are important. These are real issues that confront some people with advanced periodontal (gum) disease and make practicing periodontics challenging. Remember, periodontics is the diagnosis and treatment of diseases of the supporting structures of the teeth, the bone and gum tissues.

It sounds like you're an aware and conscientious person and are probably doing as much as you can; brushing, flossing, having regular periodontal cleanings, and hopefully your general health has been good.

Let me give you some perspective about the problems associated with advanced periodontal (gum) disease(s).

Periodontal disease is actually a group of diseases and some forms are just more aggressive and more difficult to control than others — even when you're doing “all the right things.” They are the result of interactions between bacteria in dental plaque and your body's immune system which determines your resistance to disease. In some highly “susceptible” individuals, their resistance to periodontal disease is low. Resistance to disease is genetically controlled and difficult to change, or to put it another way, some people are just more prone to disease than others. Stress can also affect resistance to disease, and especially when stress levels are high, periodontal breakdown can get worse. On the other side of the coin, the particular bacteria that make up the “plaque”, that you try so hard to keep under control with your brushing and flossing, can also be a factor in perpetuating the problem.

Some forms of periodontal (gum) disease are just more aggressive and more difficult to control than others — even when you're doing “all the right things.”

These issues can be tested for both genetic susceptibility and differing strains of bacteria. You should speak to your periodontist about them. Sometimes, however, periodontal (gum) disease may have already affected your teeth in an advanced way before anyone ever had the chance to treat it.

A better and perhaps more realistic way to look at the situation is this: in cases of advanced disease that are difficult to control, what treatment does is to change “the house odds” in your favor, perhaps not to keep your teeth forever, but for years longer! According to what you're saying that sounds very much like the case.

In telling you “to think about implants”, you're at least being given a warning of what's to come if tooth loss is in fact inevitable, a method of replacing the lost teeth, and time to prepare emotionally, psychologically and financially.

Lastly, dental implants are modern dentistry's most successful tooth replacements. The most fortunate thing about them is that in most cases if they are maintained properly, they will be healthier, stronger and last longer than the teeth that have been affected by periodontal disease.

As health professionals we want you to be as healthy and happy as possible, but there are realities to face based on each person's differing situation. I hope this helps, but do go back to your periodontist and have an open and frank discussion.