A Consultation with Dr. Mark Yanosky

Dear Doctor,
My teenager went to an orthodontist recently to straighten his teeth, something that he's wanted to do all his life. I was told that using TADS in his jaw would allow the treatment to go faster. Could you tell me more about them? 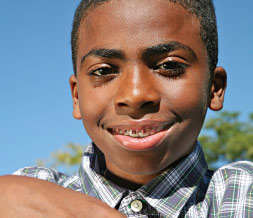 Dear Yanita,
Thanks for your question. TADs — Temporary Anchorage Devices, which comprise mini-screws and mini-implants are a new technology used to more accurately control the movement and positioning of teeth and reduce time of orthodontic treatment (ortho-movement, dontic-teeth).

But first a little background to help make sense of the whole issue. Orthodontic appliances, commonly known as “braces” describe the small brackets that are placed on teeth through which small flexible wires are threaded. These small wires put light forces on the teeth; the wires tend to straighten themselves to their undistorted forms and consequently “move” the teeth with them. The reason the teeth move is due to the nature of the tissues that make up the “periodontal ligament complex.” They are living, constantly changing and “remodeling.” The periodontal ligament is elastic (movable) — there is micro-movement of the teeth all the time even with biting forces. Fibers of the periodontal ligament insert into the teeth through a substance called cementum and on the other side into the bone. When a light force is placed on a tooth on the “tension” or pulling side, new bone, ligament and cementum are formed. On the pressure side, cells will remove bone and ligament to allow the tooth to move. It is akin to pushing a stick through sand — sand accumulates behind the stick and is pushed away in front of the stick.

Orthodontics can be made much simpler if the anchor units themselves are immovable.

“Anchorage” in orthodontics can be defined as the resistance to tooth movement, just like an anchor on a boat is used to stop it moving. Anchorage comprises teeth or groups of teeth designed to be immovable, which are used to apply forces against — thereby moving only the mal-positioned teeth into better position. The problem is always to avoid the anchor units from moving. It's like having a bunch of kids on roller skates pushing against a single kid on roller skates. If the bunch is big enough, only the single kid will move — anchorage is like an uneven tug of war.

Now, the situation can be made much simpler if the anchor units themselves are immovable. Take the skates off the group of kids and there's no way the one on roller skates will ever win that tug of war no matter how big he/she is. Enter TADS — Temporary Anchorage Devices — non-moveable devices that can be strategically placed to allow forces to be applied to move the teeth that need moving without compromising the position of teeth that don't need to be moved.

TADS consist of mini-screws or mini-implants that are temporarily placed into the bone of the jaws to be used as non-mobile anchor units to facilitate tooth movement — and which can then be removed once they've done their job. They are quite small, can be placed using simple local anesthesia (numbing shots in the area) and involve extra-ordinarily minor discomfort.

They are retained by the mechanical locking or meshing with bone around them, not fusion to bone as with regular dental implants. They are “self tapping” (just like tiny screws) and are placed with a minute driver. TADS have very close bone to screw contact which is critical to their stability. They are lower in cost and easier to place than traditional dental implants, requiring no waiting time and are simple to remove.

They can basically be used to correct both skeletal (jaw) position and dental (tooth) position discrepancies — within reason.

Dental radiographs (x-rays) are used to survey the tooth root position adjacent to the area of TAD placement to make sure there are no vital structures in the path like nerves or sinuses. Wherever possible the TADS are placed through gum tissue into bone (sounds terrible, but really isn't — no worse than a little pressure when the area is numbed). It is important that they are stable and kept clean either by swabbing with antibacterial rinse or brushing daily.

Questions to ask your dentist

Orthodontists who will be using these devices have the clearest understanding of where they should be placed. Oral surgeons, periodontists and some general dentists who have undertaken specialized training in surgical treatment are generally more experienced and comfortable in placing TADs. Generally, placement will require collaboration between orthodontist and surgeon for correct positioning and placement.

Using mini-implants such as TADs is a rapidly developing technology. TADs are becoming a necessary part of orthodontic practice by allowing for accurate and predictable tooth movement and positioning by providing stable non-movable anchor units.