You must read the fine print and your explanation of benefits

A Consultation with Tom Limoli, Jr.

Dear Doctor,
I can't have a replacement crown because my insurance won't cover it but my dentist says I need it — why isn't it covered? 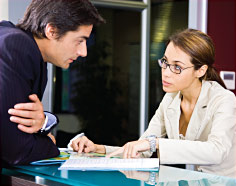 Dear Erin,
Your dentist's insurance coordinator probably submitted a claim or estimate of benefits to your dental insurance company. The first thing you need to do is look closely at the EOB (Explanation of Benefits) that your insurance company sent back to you and your dentist to determine exactly why the replacement crown is not covered.

Nearly all dental benefit plans have what is referred to as an “Exclusionary Period” or time frame in which replacements are not reimbursable by a dental insurance plan. This period of “non-benefit” depends on the specific plan that you have with your insurance company. It is not uncommon for crowns and bridges to have an exclusionary period of seven to ten years. Single and multi-surface restorations (fillings) traditionally have exclusionary periods of three to five years.

The plan may also not provide benefits if the doctor's office has not shown evidence that the existing crown was unserviceable and simply could not be repaired. Often times a photograph of the tooth will show conditions not easily seen on traditional radiographs (x-rays) which could be important to the decision makers from your benefit plan.

Another reason for “non-coverage” may be that you have already used the available benefit dollars for the current contract year. Most plans will pay a maximum of $1,000 a year.

Either way, your insurance company is simply stating, on the EOB, why they will not help you to offset the cost of a replacement crown, at this time.

You are fortunate that your dentist found the problem early enough to prevent further damage to the tooth and your dental health before something else happened, or worse you lost the tooth. Often, cases like this go untreated and deteriorate beyond simple crown replacement.

Talk to your doctor's treatment coordinator about alternative payment plans that may help make a necessary crown affordable.