A Consultation with Dr. Andrew Rosenblatt

Dear Doctor,
Is it true that some blood pressure medication can cause gum overgrowth? 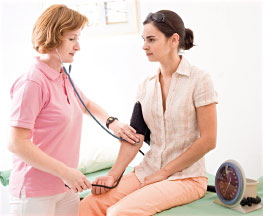 Dear Charles,
Yes, it is true — an important class of drugs known as “calcium channel blockers” (CCBs), used for treating high blood pressure, angina and abnormal heart rhythms can cause gingival (gum) hyperplasia (overgrowth), a condition where the gum tissues grow and extend abnormally over part of the teeth. Gum overgrowth can cause pain and discomfort, as well as social embarrassment.

CCBs, which may also be used by cardiac (heart) patients who can't tolerate beta-blockers (other blood pressure drugs), work by dilating (relaxing) blood vessels, which makes it easier for the heart to pump and reduce its workload. They have their share of medical side effects, including constipation, nausea, headache, rash, edema (swelling of the legs with fluid), low blood pressure, drowsiness and dizziness. For the dental patient, in addition to gingival hyperplasia, CCBs can also cause mouth dryness.

A study by Dr. Robert Genco, released in 1999 in the Journal of Periodontology, suggests that frequent dental visits following initial periodontal treatment may significantly reduce gum overgrowth in patients taking Nifedipine, a commonly prescribed CCB. The study found that gingival overgrowth recurrence was eliminated in more than half of patients with a combination of initial periodontal therapy, including both non-surgical and surgical treatments, and frequent follow-up dental visits (this is a significant advancement over earlier research, which concluded that gingival overgrowth could be minimized but not prevented with periodontal therapy and frequent dental visits).

For the roughly twenty to forty percent of Nifedipine patients who also suffer from gum overgrowth, the findings give some hope that they can continue to take the drug and control the gum overgrowth through meticulous attention to correct dental hygiene. It's especially important for patients who don't have the option of switching medications to control their high blood pressure.

If you are taking CCBs for high blood pressure and notice gum overgrowth, your dentist can give you detailed hygiene instructions, and may ask you to visit more often for professional cleanings. If you stop taking the drugs, your gums recede somewhat; however, this may take several months and they may not return to normal on their own. Additional treatment may be needed.

And, it's always a good idea to make sure your dentist knows which drugs you are taking for your high blood pressure and other conditions that may cause dental side effects.