What Are the Risks?

A Consultation with Dr. Richard Kraut

Dear Doctor,
I want to have some missing teeth replaced with dental implants, but my dentist said it could be slightly risky because I smoke. Why? 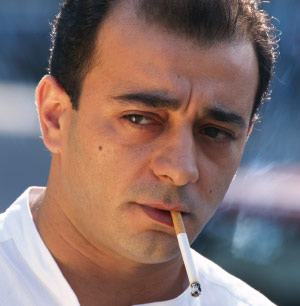 Dear John,
Smoking is always risky business when it comes to your health, and it can make replacing teeth with dental implants more complicated — though not impossible. It can also affect long-term survival of implants. Let’s delve a little more deeply and see why.

When you think about it, your mouth and lungs are at the forefront of the smoking “assault.” Smoking has two main effects on oral health: Firstly, inhaled smoke actually burns the oral tissues producing a keratosis — a thickening of the top layer of skin cells. It also occludes (blocks off) and damages the salivary glands, resulting in mouth dryness. Secondly, nicotine and its many by-products affect peripheral blood vessels (the superficial ones in the mouth and skin), in essence clamping them down so that there’s less blood flow to the areas they supply. This affects both healing and immune (defense) mechanisms. Mouth dryness also promotes increased growth of pathogenic (disease-causing) bacteria, which increases both the incidence and severity of periodontal (gum) disease. And the long-term effects of chronic tobacco use are well known: increased incidence of cardiovascular, metabolic and lung disease, and cancer.

So you can begin to understand why dental implants might not fare quite so well in smokers as compared to non-smokers. But that doesn’t mean they won’t work for you. Here’s what we know from the available research and clinical experience.

The success of dental implants rests on the special surface properties of titanium, of which they are made, and the ability of the jawbone to join with it, in a process called osseo-integration (“osseo” – bone; “integration” – fusion). Smoking in the immediate post-surgical period after implants are placed delays healing, increasing the chance of infection and early implant loss. While not an absolute contraindication, the risk for implant failure and/or complications is higher in smokers during the initial healing phase (the first two to three weeks) after placement, especially when there is a significant smoking history.

What about after the implants have healed? Implants in the mouths of smokers do exist in a more dangerous environment.

One study comparing implants in the mouths of smokers and non-smokers showed that smoking increases the annual rate of bone loss around the implants by 0.16mm/year. That’s not a huge amount, but it does compound over time. A history of smoking may also be associated with failure to maintain osseo-integration (the joining of implant to bone) once it has been established. Exposure to smoking promotes bone loss around the implants, especially where there is peri-implantitis — inflammation and infection of the gum and bone to which the implants adjoin, which can lead to rapid implant loss.

Even in a study reporting high long-term implant survival rates of 92% over a 20-year period (with an overall failure rate of 8%), twice as many of the implant failures were noted in individuals who were smokers versus non-smokers.

Even in a study reporting high long-term implant survival rates of 92% over a 20-year period (with an overall failure rate of 8%), twice as many of the implant failures were noted in individuals who were smokers versus non-smokers. Early implant failure was significantly associated with smoking at the time of surgical implant placement. Later failures, which occurred after the implants were attached to the dental crowns that make them functional replacement teeth, were associated with a positive history of smoking. A direct relationship between the quantity of cigarettes smoked and early implant failure was also noted.

Overall, there is little difference in failure rates of implants in smokers and non-smokers when looking at large numbers over many years. The issue is the difference between statistical significance in studies, and clinical significance: In other words, is implant failure going to occur in your mouth? If it is, the fact that implant failures are relatively rare will be of little consolation. It should also be noted that failing implants are harder to treat and salvage than failing teeth, so regular and careful maintenance is important for implant longevity.

Here are some suggestions to minimize complications and failures if you decide to go ahead with dental implants to replace your missing teeth, at least in regard to smoking:

Your dentist was right to let you know that you are at increased risk for implant failure, however small it may be. By understanding all of the risks, benefits and alternatives, you will be able to make the best decision — hopefully one that will improve not just your oral health but your general health as well.