Dear Doctor,
My daughter is 9 years old and her upper teeth are already quite crowded. In addition, her upper back teeth bite inside the lower ones. The orthodontist said this is correctable with “maxillary expansion.” Sounds scary; can you please help explain? 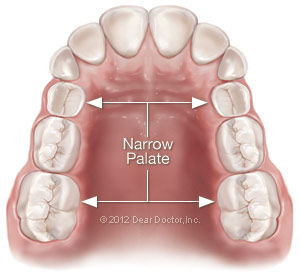 Orthodontics (“ortho” – straight; “dont” – teeth) is more than just moving teeth. Guiding the growth of an adolescent's facial bone structure, also known as dentofacial (“dento” – teeth; “facial” – face) orthopedics (“ortho” – straighten; “ped” – child), is an effective way to treat certain malocclusions (“mal” – bad; “occlusion” – bite). Orthodontists are dentists who have received two to three years of advanced full-time education beyond dental school to specialize in straightening teeth and assisting in the growth and development of the facial structures, including the skull and jawbones. This allows us to take advantage of the unique time in life during which the dynamic process of growth can be influenced very positively, as in the case of some developing malocclusions. That's where maxillary expansion comes in.

The upper jaw and palate (that's the roof of your mouth) together are known as the maxilla. The maxilla is actually formed from two bones that fuse together in the middle of the palate in an area called the midline suture. Because this fusion is not complete until a little after puberty, the width of the palate can be increased by separating the two bones where they join at the suture. The special appliance used for this is known as a palatal expander. The tension on the suture causes the body to deposit new bone at the junction, thus maintaining this widened position. Meanwhile, more room for the teeth will have also been created. 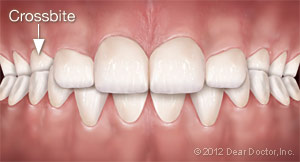 This orthopedic (skeletal) expansion of the maxilla is often indicated when the upper jaw is too narrow and a cross-bite (what you describe in your daughter's mouth as the lower back teeth biting outside the upper ones) is evident. In these cases, generally, there is also insufficient room for the upper permanent (adult) teeth to erupt into proper alignment, and some people may also have to shift the jaw to one side in order to bite down all the way.

Palatal expansion can be used effectively to treat cross-bite problems and provide more space to resolve borderline crowding in mixed dentition cases. This describes your daughter, who, at 9 years old, has a mix of baby teeth and new adult teeth. Expansion can also be used as a form of early intervention when either: the jaws appear to be growing asymmetrically; there is a shift in the bite; or a crossbite is present.

Using expanders can facilitate eruption of blocked or impacted canine teeth (the big teeth that develop just under the sides of the nose) by making space for them. And there are other benefits. For example, expansion can broaden the smile in an aesthetically pleasing way, and even relieve breathing difficulties by opening up the nasal passages.

Orthopedic expansion is accomplished by using a small custom-made appliance (the Palatal Expander) that fits on the upper teeth towards the back of the mouth. It has two halves that are connected to each other in the middle with a small screw device. As you or your daughter turn the screw by a very small amount once or twice a day with a special key, the tension induced at the junction of the two maxillary bones stimulates growth at the suture. Discomfort is minor, lasting for only a few minutes each day and pain medication is rarely needed. As the screw is turned, a small gap typically appears between the front teeth. This space often closes by itself, but is also easily correctable with four braces on the front teeth.

The expander is worn until the desired amount of expansion is obtained and stabilized, usually three to six months. Expanding the size of the upper arch and by consequence repositioning the upper teeth can have a positive effect on the lower teeth, too. But don't wait until it's too late; once the maxillary bones are completely fused only surgery can separate them. You have a window of opportunity now that will close — literally — sometime after puberty.