Dear Doctor,
After he won Team USA's first gold medal at the London Olympics, swimmer Ryan Lochte got into trouble for trying to wear a jeweled replica of the American flag on his teeth during the medal ceremony. What's the harm in this? 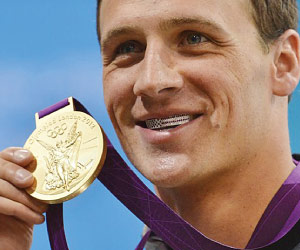 Dear Whitney,
That depends on whom you ask. An Olympics official might tell you that Lochte's oral ornament, known as a dental grill, is not appropriate athletic attire. A dentist, on the other hand, would probably let you know that Lochte's removable diamond-studded grill, which fits over his top teeth, could put his oral health at risk if worn over extended periods of time. While there are no scientific studies proving dental grills dangerous, neither are there any proving them safe. Meanwhile, they could present a host of potential problems. Grills, especially if permanently attached, are difficult to clean, trapping food and bacteria, which can promote tooth decay, gum disease, and/or bad breath. They can also chip or wear down the opposing teeth. Gum irritation and metal-allergic reactions are also cause for concern. Meanwhile, some hip-hop stars pay thousands of dollars for their gem-studded “grillz” or “fronts,” as they are also called, but cheap imitations can be had for as little as $20. As they say, “beauty is in the eye of the beholder,” but all in all, a dental grill may be a high price to pay for a fashion statement — even if you don't opt for diamond-encrusted platinum.