You can only lose with chewing tobacco

A Consultation with Dr. John Greene

Dear Doctor,
My son, who is 16, recently joined a baseball team and is now chewing tobacco. He doesn't smoke and tells me it's not dangerous — but I wonder. 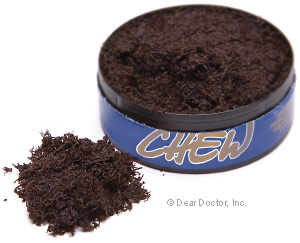 Dear Mrs. Martin,
You are right to wonder about your son's use of chewing tobacco. Many young boys are using it because they want to be one of “the guys” and they think it is “cool.” It is not “cool” but rather disgusting. If I could speak directly to your son I would say: chewing tobacco makes you spit all of the time, it makes your breath smell, it causes gum disease, tooth decay, increases your risk for getting oral cancer and developing cardiovascular problems. The tobacco company that produces “dip” or “snuff,” (the most popular type of chewing tobacco today) has given it the name smokeless tobacco to make you think it is harmless when in fact it is dangerous. Some people have developed oral cancer from using this stuff on a regular basis and as a result have lost half of their tongue, their lower jaw, or half of their face. Some have even lost their life from it. Only about fifty percent survive more than 5 years after being diagnosed with oral cancer.

The tobacco company has given it the name “smokeless tobacco” to make you think it is harmless but it is not — it is dangerous.

Unfortunately, many young guys, especially athletes who play baseball and want to be like their heroes in the major leagues, start “dipping” in their early teens. They start using mild starter brands, become addicted and graduate to the stronger ones. Chewing tobacco, now known as “spit tobacco,” contains nicotine which causes addiction and craving for more and more. Before they know it, they are hooked and have a terrible time giving it up. They get as much nicotine circulating in their blood stream as from smoking. The nicotine is not only addicting, it also causes constriction of arteries, increases heart rate and blood pressure and may affect the stamina you need for sports. While responding to the craving for more nicotine to satisfy their addiction, the user is taking in an ever-increasing amount of cancer-causing chemicals into their mouths and their circulating blood. Spit tobacco contains more than 30 chemicals known to cause cancer.

Young men start what seems like a very harmless habit and before they realize it they are hooked, addicted. Few know of the risks they are taking or that the risks increase as they continue to dip or chew. Some young men have paid the ultimate penalty — death. Sean Marsee, was a star athlete, who started using at age 12. He was diagnosed with oral cancer at age 18 and he died at age 19. Bob Leslie, another baseball player and high school coach, started chewing in his early teens. He was diagnosed with cancer in his early twenties and died in his early thirties. Then there is Gruen von Behren who started using spit tobacco at age 13 just to “fit in” with the guys. He was diagnosed with oral cancer at age 17 and has had more than 30 operations that have left him so disfigured he can't “fit in” anymore. He is now devoting his life to getting the word out to young people that tobacco is not something to play around with and should be avoided like the plague.

Spit tobacco contains more than 30 chemicals known to cause cancer.

So, I appreciate your concern but the good news for you is that now you can advise your son of the dangers of using tobacco in any form and hopefully get him to quit while he can. You both need to realize that the longer he “uses” the more difficult it will be to quit, and the longer he “uses” the greater the risk of developing serious consequences. So the best time to quit is NOW. If he has trouble quitting he should ask his dentist for help or contact a free tobacco quit line for assistance.

Please remember that smokeless does not mean harmless, and that it is not a safe alternative to smoking.