An aspirin a day keeps heartache at bay 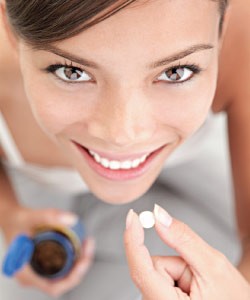 Dear Doctor,
As a dental hygienist, I frequently see patients who are taking aspirin. What do you think patients need to know about the influence of aspirin on oral and general health?

Dear Louisa,
Aspirin, acetylsalicylic acid ASA, is the most widely used over-the-counter (OTC) medication in the U.S. People take aspirin for its anti-inflammatory, pain relieving and fever reducing properties. Aspirin is the drug of choice for relieving mild to moderate pain, such as pain associated with headache and menstrual cramps. It is also used in combination with other pain relievers for migraine headaches and prescription medications for relief of moderate to severe pain.

Aspirin works by blocking the formation of “prostaglandins,” chemicals named for their discovery in the prostate gland, and which are responsible for their role in inflammation. Trauma or injury initiates inflammation, and damaged tissues become red, swollen and painful. We take aspirin to both reverse these symptoms and to control discomfort.

In addition to prostaglandins associated with inflammation, our body also makes others that protect cells and tissues. For example, protective prostaglandins keep the kidneys healthy and form an important barrier that protects the stomach lining from the acid that it normally produces to aid in digestion.

Unfortunately, when aspirin is taken to reverse inflammation, it blocks the formation of protective prostaglandins as well. This leads to unwanted side effects, such as gastrointestinal GI (“gastro” – stomach; “intestinal” – gut) bleeding and ulceration, and kidney damage, which are especially associated with long-term use. This explains why it is difficult to take aspirin over extended periods of time for chronic inflammatory conditions such as rheumatoid or osteoarthritis.

Aspirin also produces effects on platelets, the tiny plate-like shaped structures in blood that aid in clotting. When a blood vessel is damaged or cut, the platelets stick together and to the site of the injury to control bleeding. Aspirin prevents platelets from sticking and clumping together, which in a healthy individual can cause prolonged bleeding, bruising and the possible risk of hemorrhage. However, this is exactly why aspirin is beneficial for protecting people who are at risk for heart attack and/or stroke. In an individual at-risk for cardiovascular disease (“cardio” – heart; “vascular” – blood vessel), aspirin helps to keep the blood moving freely through narrowed or damaged blood vessels. In fact, aspirin is used for the primary prevention of heart attacks and strokes.

Always inform your medical and dental professionals if you are taking aspirin, including how much and how often you take it.

Aspirin taken at a low dose of 81 mg (“baby” aspirin) has been shown to significantly reduce the risk of non-fatal heart attacks and strokes, and cardiovascular death. However, despite cardiovascular risk reduction, patients taking aspirin are also at a higher risk for unwanted bleeding, including risk for strokes caused by hemorrhage in the brain. It is important to remember that strokes can be caused by occluded (blocked) blood vessels or by ruptured blood vessels in the brain. Therefore a patient's physician must weigh the cardiovascular benefits of taking aspirin against the risks of unwanted bleeding in individuals with cardiovascular disease.

As with most medications, effects are dose-related, however adverse effects are extremely rare when aspirin is used in low dosage. Individuals should also be aware that aspirin will interact with any other medication that alters bleeding, including the blood thinner warfarin (Coumadin®), non-steroidal anti-inflammatory (NSAIDS) drugs like ibuprofen, and many herbal medications. Consumers are often unaware that over 50 herbal medications can alter platelet and blood clotting function, and they often fail to report the use of herbs and supplements to their healthcare providers. Drinking alcohol with aspirin can also hasten and/or worsen the development of bleeding from the GI tract.

There is growing evidence that some individuals may be resistant to aspirin therapy. Resistant individuals may still experience a heart attack while taking aspirin, and require additional “anti-platelet” therapies to reduce their risk.

Implications for Your Dental and General Health

Always inform your medical and dental professionals if you are taking aspirin, including how much and how often you take it. Be certain to consult your physician for advice as to whether you can take it safely; not everyone is a candidate for aspirin therapy. Contraindications to taking aspirin include: allergy to salicylates and NSAIDS, asthma, nasal polyps, and individuals who have inherited or acquired bleeding disorders. Caution should be used in people with compromised kidney function, and who are taking other NSAIDS or anticoagulant (blood thinning) medications. Aspirin should not be used for children with viral infections, such as influenza or chicken pox, due to the increased risk of the potentially fatal Reye's Syndrome — a condition characterized by severe vomiting, high fever, headache, liver complications, and swelling of the brain. 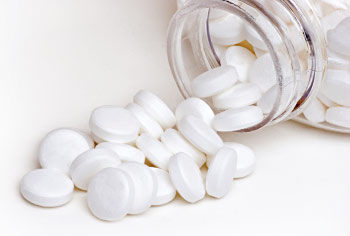 Check other OTC medications that may also contain aspirin to ensure that you do not take excessive doses, which can inadvertently increase your risk of side effects. Ask your physician, dental professional or pharmacist to help you determine whether herbal medications and supplements are safe for you to take with aspirin and other blood-altering medications.

Full strength aspirin (325 mg) is used during acute heart attacks and strokes, as it has been shown to increase survival. Higher doses are also used after placement of coronary stents and following some cardiac procedures. If you have been told to take aspirin, be certain to comply with your treatment recommendations.

Ask your dentist if you should to stop taking aspirin prior to major dental or oral surgery.

New research has shown that non-compliance with prescribed regimens, such as sudden discontinuation of aspirin therapy, increases the risk for heart attack, stroke, unwanted bleeding, and even death. You should not stop aspirin therapy on your own prior to a dental procedure, although many individuals do so, fearing bleeding complications afterward. There is no evidence to support the need for discontinuation of aspirin therapy prior to most dental procedures. Ask your dentist if you should stop taking aspirin prior to major dental or oral surgery. If necessary he/she will consult with your physician about your medical condition and recommendations.

You may observe bleeding from your gums when you brush and floss your teeth while taking aspirin. Discuss this finding with your dental professionals; most often bleeding is a sign of periodontal (gum) disease. Your dentist or hygienist will determine whether this sign is a result of aspirin therapy. Report excessive bruising or bleeding problems immediately to your healthcare professional. Aspirin is a widely used medication with numerous benefits, but as with all medications, it must be used carefully to ensure safety. It is always important to check that aspirin is compatible with your other medications, including OTC drugs and supplements. Use aspirin as directed, and monitor yourself for signs and symptoms that suggest you may be experiencing unwanted adverse effects.