Dear Doctor,
I keep hearing about a new sugar called “Xylitol” that is in chewing gum and other foods. Is it really good for my children's and family's teeth? 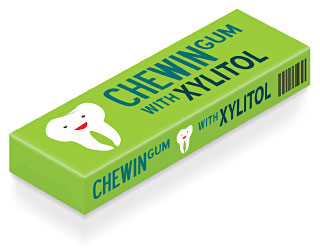 Dear Wendy,
Xylitol is indeed becoming quite popular especially in dentistry and for good reason — it helps prevent cavities. It is a natural “sugar alcohol” similar to other so-called sugar alcohols such as mannitol and sorbitol used as sugarless sweeteners. Xylitol is a naturally occurring diabetic-safe, low-calorie carbohydrate that is obtained form the bark of birch trees, coconut shells and cottonseed hulls. However, it looks and tastes like sugar and is comparable in sweetness. It is also found naturally in many fruits and vegetables, including corn, raspberries, and plums.

Unlike sucrose (regular table sugar), the main culprit associated with tooth decay, xylitol is not broken down by the most prominent decay causing bacteria, Mutans Streptococci, to produce acid. In effect, xylitol starves these particular bacteria to the point where it is almost like removing sugar from the diet completely.

Xylitol is becoming quite popular especially in dentistry and for good reason — it helps prevent cavities.

What you may not have known is that these bacteria are actually transmitted initially from a parent to their children through oral contact such as a simple lip-to-lip goodnight kiss. However, you can inhibit the growth and attachment of these bacteria to your teeth thereby interrupting the transmission to your children by including xylitol in your diet. Xylitol also has the added effect of stopping the saliva from becoming acidic so that decay not only doesn't start, but rather your mouth becomes an environment that favors non-acid producing bacteria.

Researchers have found that systematic use of xylitol chewing gum significantly reduces the relative risk of caries (tooth decay) when compared to chewing gums containing sorbitol/xylitol and sucrose. Additionally, xylitol gum is more frequently associated with halting the progression of very tiny cavities versus other combinations of chewing gum. The use of other products containing xylitol such as mints, candy, and cookies has shown a decreased incidence of dental caries by arresting active decay. 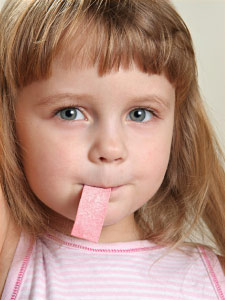 Another benefit of using xylitol-containing products is that it increases salivary flow along with its acid neutralizing properties to cause a sort of natural reconditioning of teeth following an acid attack. In other words, the reaction between xylitol and your salvia's mineral-rich calcium and fluoride content contribute to re-mineralization (hardening) of your teeth. And this benefit is not confined just to children, but rather is extended to many adults who experience dry mouth. The only side effect of too much xylitol ingestion is that it may have a mild laxative effect.

The amount of xylitol needed for benefits against caries is slowly being refined. Current recommendations for moderate, high, and extreme caries-risk patients includes consuming two pieces of xylitol gum or two pieces of xylitol hard candy/mints for five minutes following meals or snacks four times daily. The target dose of xylitol is 6 to 10 grams (1-2 teaspoons) spread throughout the day. However, because excessive or prolonged gum chewing is not advised, most xylitol-sweetened products contain flavor that only lasts a short time to discourage excessive chewing. Adults who experience dry mouth or senior citizens who may not like to chew gum because of occlusion (bite) problems have the option of using xylitol in mints, candies, mouthwash, toothpaste, or mouth sprays. For these individuals, a minimum dose is 5 to 6 grams (1 teaspoon) three times per days.

So yes, xylitol really is a different kind of “sugar” that is effective at fighting tooth decay and not just for your children.