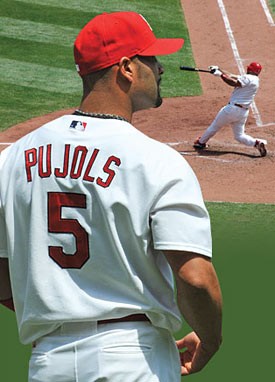 Some years ago a young boy growing up in the Dominican Republic dreamed of becoming a big league baseball player. But the young dreamer and his family were immersed in poverty, an obstacle almost too great to overcome.

Somehow though, José Alberto Pujols Alcántara and his family found a way to get to the United States, with a chance to follow his dream. After playing stellar baseball in high school and college, José Alberto — better known to baseball fans everywhere as Albert Pujols — made it to the major leagues in 2001.

In just eight seasons with the St. Louis Cardinals, Pujols has established himself as one of the best players in baseball. Known for his power, Pujols is already in the top 100 home run hitters, and has a career batting average of .333. The 28-year-old standout is on track to becoming one of the sport's greatest players.

And yet, he is still very much that young boy at heart, from one of the world's poorest countries who feels deeply for those in need, most especially for healthcare. That's why in 2005, he and his wife Deidre formed the Pujols Family Foundation.

The foundation was originally formed to assist children with Down's Syndrome in the St. Louis area. This desire to help others grew out of their own family's experience — their daughter Isabella, Deidre's daughter from a previous relationship, is a Down's Syndrome child. Since its formation, the Pujols Family Foundation has assisted over 500 families with various programs and resources.

But his efforts haven't stopped there. Pujols has also sponsored several medical missions to the Dominican Republic benefiting thousands of people with necessary medical services, including teams of healthcare professionals and the donation of hundreds of thousands of dollars for supplies and equipment.

We became aware of the Pujols Family Foundation because of its commitment to improving dental health for those who would otherwise go untreated. Dental missions are routinely among the many causes the foundation sponsors each year. After the St. Louis Cardinals won the 2006 World Series, Pujols gave up a golden opportunity to attend a meeting at the White House with the President. Instead, he decided to honor a prior commitment to accompany a group of dentists on a mission to the Dominican Republic to provide dental care to those most in need. During that trip he provided two portable dental units and much needed supplies to his native country.

Early in 2009, Pujols lent his support to the American Dental Association's “Give Kids A Smile” program, which on the first Friday of February each year provides children from low-income families with free dental care and support. This past February more than 12,000 dentists and 32,000 team volunteers provided free services to approximately a half million children at over 1,600 locations across the country. To jumpstart the campaign, Pujols filmed a number of public service announcements to promote the event.

His passion to help others has deep roots. He and Deidre have a strong religious faith that motivates them to serve others. Pujols also credits this desire to help those in need from his own family background. “I remember my dad would stop eating and just give his food to other people. As a little boy growing up watching that, obviously, those are good examples that you want to take with you.”

In recognition of his accomplishments as an athlete and his efforts to help others, Pujols was awarded the Roberto Clemente Award in 2008. The award is named for the Pittsburgh Pirates all-star outfielder who died in a plane crash New Year's Eve 1972 while taking supplies to earthquake-torn Nicaragua. The award is given each year to the major league player who exemplifies the best in baseball, both on the diamond and off.

While most baseball fans know Albert Pujols for his brilliant play on the field, it is his dedication to those less fortunate off the diamond that defines the man. Thousands of children have healthier lives — and smiles — thanks to this gracious, young man.