Whole grain products and their effect on tooth development

Dear Doctor,
My four year old daughter has some white markings on her front teeth that my dentist described as decalcification. She also has constant diarrhea and bloating. I have a family history of gluten intolerance (wheat products). Is there a relationship between these issues? 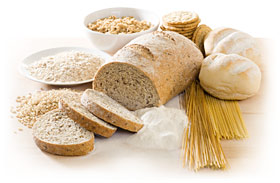 Dear Liz,
You're right on all counts! Your child may well have Celiac Disease (CD), an “autoimmune” disorder in which the body's normally protective “immune” system works against itself (auto=self, immune=protective/defense or resistance system). CD is actually intolerance to gluten, a protein found in wheat, rye, barley, malt and sometimes oats, which is often mistaken for an allergy, but it is more than that. CD affects one in 133 people in the United States, is seen three times more frequently in females than in males and is often, but not always, hereditary.

When a person with CD eats gluten, her immune system actually initiates an attack against parts of the lining membranes of her digestive system, essentially setting up an attack on the person's own body. The real problem is that gluten causes an obliteration of the cilia (minute hair like structures lining the small intestine that absorb food), therefore leading to mal-absorption of nutrients. Untreated CD can even cause intestinal cancer.

What to Look Out For

This autoimmune disorder mimics many other diseases, disorders and conditions. Among the most common are Irritable Bowel Syndrome (IBS), acid reflux, food allergies and lactose intolerance. Alternatively, CD may be present without symptoms, which makes for a more difficult diagnosis. The most common symptoms of CD in children are diarrhea, bloating, bellyaches, fatigue, growth abnormalities, vitamin deficiencies and skin irritations.

Now that more children and adults are being diagnosed with and treated for CD, there has been clear documentation of oral manifestations, the most common being dental enamel defects. These imperfections are generally symmetrical in nature and include spots or pitting of the enamel. Loss of the shiny enamel layer in the developmental grooves of the central incisors is another possible consequence of CD. The grooves then appear a bit chalky or opaque-like — what we call decalcification, a loss of surface enamel crystals. The teeth may also show white, yellow or even brown spots and eruption may also be delayed. Aphthous ulcers (canker sores) are also strongly associated with CD.

CD often goes undiagnosed or mis-diagnosed for years. Dentists, who previously were unaware of these relatively new findings, can now use them, coupled with a suggestive medical history, to diagnose CD or other related conditions properly.

Diagnosis of CD is a two-step process. First, the pediatrician or treating physician will request a blood test called a Celiac panel which tests for “antibodies” to gluten. The key factor in achieving an accurate result is not to eliminate gluten from the diet prior to testing the blood. If the blood test is positive and the results indicate CD, the next step is an intestinal biopsy (removal of a small sample of tissue for analysis) to confirm the diagnosis. This is the only way the doctor can view the small intestine, assess the damage caused by gluten and determine whether gluten should be removed from the diet.

What Can Be Done

Treatment of CD has been and remains strictly dietary: “Eat Gluten Free!” This sounds pretty straightforward, but in today's world of fast food, pizza, cookies and other treats, it can be a trying diet — simple to articulate but not so simple to implement, particularly for children.

Luckily the world is becoming more GF-educated and tolerant. For example, more and more companies are making and distributing gluten-free (GF) products, many manufacturers are labeling products more clearly and some restaurants are even providing GF menu items.

CD kids must maintain a GF diet to stay healthy and avoid the adverse consequences. Several institutions, including Stanford University and Columbia University, leaders in CD-related research, and California Pacific Medical Center, are working on the development of medication to counteract the adverse effects of gluten and allow CD intolerant persons to consume gluten once again.

As for the dental treatment, CD patients, particularly kids, should be treated the same as all other patients, but with a few precautions. For example, the ingredients in polishing paste and fluoride gel should be verified for absence of gluten. Treatment of the tooth enamel defects associated with CD can be successfully treated cosmetically.

You May Just Change Your Child's Life

In today's age, dentists taking very thorough medical histories and spending the necessary time talking to and examining their patients, can uncover links between dental and dietary related problems that previously may have gone undiagnosed. If you are suspicious, go and see your pediatric dentist and/or physician to consider exploring a CD diagnosis. You may change or even save your child's life!