The Impact of a Smile Makeover

What does it really mean? 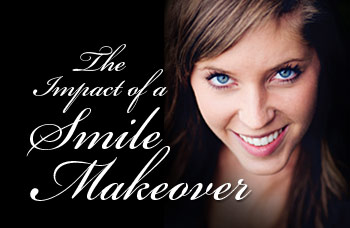 The subconscious yet contagious impact of a beautiful smile is radiant health, happiness, warmth and invitation. A “Smile Makeover,” a common household term for many Americans today, is designed to enhance the esthetic and functional aspects of teeth through cosmetic and restorative dental procedures leaving one with a brighter, whiter, more youthful smile. In the overall context of the face, it's the eyes and smile that speak to us. When you smile they both light up.

Americans are catching on to the emotional and social importance of a healthy, beautiful smile, and they're seeking out ways to improve their smiles. It's not only the rich and famous looking for a smile makeover. According to the largest organization devoted to smile enhancement dentistry, the American Academy of Cosmetic Dentistry, over 70% of clinical inquiries about cosmetic dentistry come from those in the 31-50 age group — including not only people in family situations and the workforce who want to improve their social and business interactions, but also individuals who just simply want to feel better about themselves.

First impressions are not only important; they often last the longest.

There is no doubt that among people suffering from poor self-image, dental concerns rank among the highest. Smiling, one of humanity's most innate and in-borne natural expressions, is inhibited when it's not all it can be. Raising the curtain on the theatre of a smile sets the stage before the show even starts. When the curtain goes up and teeth are discolored, missing, or misaligned, it may be a show stopper right there.

It really doesn't matter if it is a serious defect or a slight imperfection — if a person is self-conscious about their smile, it can exact an emotional toll and adversely affect interactions with others.

The greatest effect, of course, is within the person himself or herself — YOU — and often it doesn't end there. Far from being “just in your mind,” an inhibited smile may also affect others' perceptions of you. 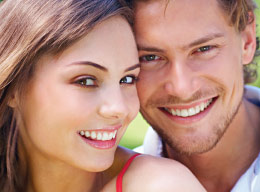 Self-expression is one of the basic freedoms that Americans enjoy. This begins with our ability to engage with others through smiling, laughing and a host of facial expressions. However, the inhibited feelings associated with an unattractive smile have a ripple effect:

Perceptions of a Smile

Beall Research & Training, a marketing research firm recently conducted a study evaluating how individuals perceive others according to the quality of their smile. In the study, over five hundred people were shown photographs taken before and after treatment of several individuals who had undergone various degrees of cosmetic dentistry. Each picture was classified by the perception of change created by the “smile makeover.” The photographs were defined as mild, moderate and extreme in regards to the change in appearance (none of the subjects in the photos had catastrophic or grossly deformed smiles to begin with). They were asked to rate each individual they viewed on a scale of 1 to 10 (“1” equaling “no change at all” and “10” equaling “extreme change”) for ten different character traits including “intelligence,” “happiness” and “degree of success.”

While the amount of the cosmetic change between the two photos in each set may be viewed as “not dramatic,” the change in perceptions of those who viewed the photo sets made a definite impact on the measurements. Every category saw a significant improvement in scoring for each pictured individual when comparing the before photos to the photos after cosmetic dentistry. The most significant improvements in character traits occurred in the categories of “attractiveness,” “wealthy” and “popular with the opposite sex.”

Beyond personal and social perceptions, smiling is also viewed as a key component in gaining cooperation, especially among strangers, in a variety of human interactions and transactions. In other words, as the late Dale Carnegie might have put it, a smile is contagious. It can help you “win friends and influence people.”

In 1999, scientists from a variety of disciplines, including zoology and economics, put this idea to the test. Over one hundred subjects participated in a game with the object of making a simple “one-shot” bargaining deal (based on trust) with another participant whom they had not met. They had, however, seen photos of the other contestants — under controlled conditions — of either their bargaining partner smiling or not smiling. The results lent support to the idea that game partners previously viewed as smiling had a greater chance of eliciting trust and completing the bargain.