I'd Rather Have a Root Canal...

A Popular Expression With A Common Misconception! 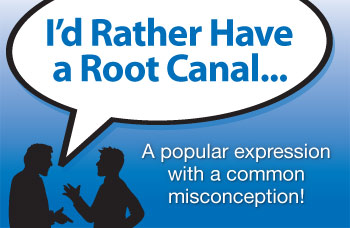 “I'd rather have a root canal” is a common idiom in our culture for comparing worst case scenarios. However, the underlying sentiment, that is, a situation is so bad one would rather “endure” a root canal is based on a common misconception. While pain in a root canal is from “pulpal” inflammation or infection, which can be excruciating, the actual treatment is relatively painless and very successful.

So the question to ask is, “What is Root Canal or Endodontic Treatment?” This particular treatment has its own specialty called “Endodontics.” The word is derived from the Greek words meaning “inside” (endo) the “tooth” (dont). Endodontics or Root Canal Treatment is a specialized dental procedure performed by a dentist or endodontist (a root canal specialist) to treat the inner aspect of a tooth, specifically the area occupied by “pulp tissue.” While most people commonly refer to this pulp tissue as the “nerve” of the tooth (and it does contain a few nerve fibers), the tissue contains much more; tiny blood vessels that give it vitality and “connective” or support tissues that function like most of the other soft tissues of the body.

Teeth are like icebergs; the crowns of the teeth are above the gums and are the parts you see in the mouth, the majority of the tooth is below the gum, which consists of the roots comprising roughly two thirds of the tooth. The crown of the tooth is covered by an enamel cap which is non-living. It is the hardest substance known in nature in the animal world; it is quite impervious to physical and chemical attack and is designed to protect the tooth.

Beneath the enamel cap is the majority of the tooth which is made of dentin, a living bone like substance. Coursing through the central part of each root is a hollow space or canal, which contains the pulp tissue. When a tooth is healthy, the pulp functions as a sensory resource for the tooth: the nerves in the pulp allow the dentin to sense temperature changes transmitted through the enamel. When temperatures are extreme the nerves signal sensitivity and pain.

The pulp, however, is a remnant of development and the tooth can function without it. In fact, as part of the aging process, the pulp shrinks as it lays down more dentin making the small pulp chamber smaller and smaller as it “calcifies” until it is essentially obliterated in late adulthood. The teeth become thicker, in a sense, and slightly darker with age.

When the first “endodontists” realized the pulp could be lost or eliminated without any significant consequences, the discovery led to the root canal treatment used when this portion of the tooth became diseased. This occurs when the pulp becomes inflamed or infected due to a variety of causes including deep decay, extensive dental procedures, and cracked or injured teeth. If pulpal inflammation or infection is left untreated, it can cause pain or lead to an infection commonly presenting as a dental abscess.

Root canal treatment can be initiated to relieve pain by removing the inflamed or infected pulp, and the bacteria and bacterial toxins that are often associated with the diseased tissue. After the pulp chamber has been cleansed, enlarged and sterilized, also called “the root canal preparation,” the canal can be sealed with inert filling materials that might replicate the calcific-deposits that occur naturally during the aging possess. The most common material used to fill or “obturate” the canal is a naturally occurring isomer of natural rubber called gutta percha and specialized sealers that are insoluble. These materials are biologically compatible with the tooth substance, and if placed properly, seal the root canal hermetically preventing further bacterial invasion (Figure 1).