Ingenuity At Its Best

What can be done to replace missing teeth and avoid debilitating bone loss? That depends on how many teeth have been lost. A better treatment option to replace a single missing back tooth is a single-tooth implant. A dental implant is actually a tooth root replacement, to which a crown is attached. The implant, made of commercially pure titanium, has a uniquely biocompatible property, which allows it to “osseointegrate” with the jawbone (“osseo” – bone; “integration” – fuse with). A crown, the portion of a tooth seen in the mouth, attaches to the implant, which looks, feels and functions like a natural tooth. And better yet, if for any reason the crown needs to be removed or replaced, it is removable, so that the implant is not compromised or damaged. Now that's ingenious.

For years, patients were advised to accept the limitations of a FPD as it was the best treatment for tooth replacement. The primary reasons for suggesting a fixed bridge were its clinical ease, reduced cost and treatment time. However, if this concept were expanded, extractions would replace root canals and removable partial dentures would be used instead of fixed bridgework. But the primary reason to suggest a particular treatment should not be related to time, costs or difficulty of the procedure; it should be the best possible long-term solution for each individual.

In 2008, my research colleagues and I surveyed more than 1,200 implants placed over a 10-year period. We found that over 99% of the implants were successful and functional. As important, survival of the adjacent teeth was not compromised. In comparison, FPD failure rates were as high as 20% within 3 years, and 50% rates at 10 years. The single-tooth implant represents the treatment of choice from both a health and value standpoint.

Health-related advantages of a dental implant tooth replacement include no risk of decay and decreased risk of periodontal (gum) disease. There is also a decreased risk of abutment tooth decay, endodontic (root canal) failure, and improved aesthetics since the adjacent teeth remain un-capped. Psychological advantages are significant as well, especially with congenitally missing teeth (“con” – without or missing, “genital” – birth).

Implants can also benefit those missing some or all of their teeth — and the number of these individuals is growing. A 1999-2002 survey found that Americans older than age 60 have lost an average of 9 teeth. Incredibly, approximately 30 million Americans or about 17% of the entire United States adult population had at least one full arch of teeth missing. Although the rate is decreasing every decade, the elderly population is rising so rapidly that the number of adults in need of one or two complete dentures is actually predicted to increase from 33.6 million adults in 1991 to 37.9 million adults in 2020. 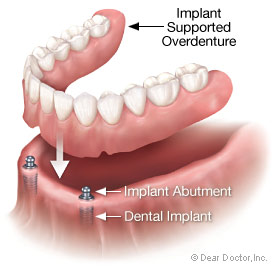 For these individuals, implants offer many advantages. They can be used to support bridges without the need for abutment teeth, or even a full arch of false teeth that would otherwise rely on support from pressure on the gums and underlying bone, which continues to resorb and melt away. A removable denture (complete or partial) pressing on the gum and oral membranes accelerates bone loss. Biting force is transferred to the bone surface only, not the bone structure. As a result, blood supply is reduced and total bone-volume loss occurs. This issue, which is of utmost importance, has been observed but not addressed in the past by traditional dentistry. In fact, denture-wearers are not always made aware that bone loss will cause their dentures to slip, and bone loss accelerates when dentures fit poorly. Implants prevent more than a twentyfold decrease in alveolar and jaw-bone loss, compared with removable dentures. Furthermore dentures may reduce function to one-sixth of the level formerly experienced with natural teeth, whereas implants may return function to near normal limits.

A fixed bridge or even a removable partial denture secured in place by implants is much more stable than a denture that relies only on the soft tissues of the mouth for support. Removable dentures (unsupported by implants) affect a person's ability to chew. Studies show that 29% of denture wearers are able to eat only soft or mashed foods, 50% avoid many foods and 17% claim they eat more efficiently without their dentures. Those who wear removable dentures tend to avoid fruits and vegetables. This can lead to poor nutrition, digestive tract problems, illness and even shortened life expectancy.

Dental implants fused and integrated into the jaw-bone serve both as anchors to support teeth and as one of the better preventive maintenance procedures in dentistry. A primary reason to consider dental implants to replace missing teeth is the maintenance of jaw bone. As you may recall, bone needs stimulation to stay healthy. An implant-supported tooth, or teeth, allow for normal function of the whole stomato-gnathic system (“stomato” – mouth; “gnathic” – jaws) including the nerves, muscles and jaw joints. Moreover dental implants fuse to the bone, stabilizing and stimulating it to maintain its dimension and density.

In addition implant-supported fixed bridges function the same as natural teeth. Beneficial effects of improved diet have been reported, as well as significant improvement in eating enjoyment and social life. And those with dental implant tooth replacements judge their overall psychological health improved by 80% compared with their previous state while wearing traditional, removable dentures. In fact, they reported feeling that their implants were an integral part of their body.

The success rate of dental implant prostheses (tooth replacements) varies, depending on a host of factors that change for each individual. However, compared with traditional methods, they offer increased longevity, improved function, bone preservation, and better psychological well-being. Dental implants regularly attain a 10-year survival of more than 90% and most can last the life of the person.

I believe the current trend of expanding the use of implant dentistry will continue until every dental practice uses them on a regular basis, as the primary option for all tooth replacement. At the very least, all people should ask about the option of dental implants to replace missing teeth so that they can make intelligent, well-informed decisions regarding their healthcare.