Getting The Full Picture With Cone Beam Dental Scans

Making The Invisible, Visible — The Many Advantages Of 3-D Images 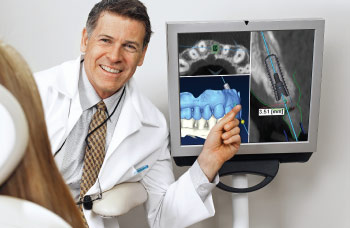 When dental x-ray technology first became available early in the last century, it proved an invaluable diagnostic tool to medicine and dentistry. It soon became routine for dentists to use x-rays to help plan the best course of treatment for their patients. Exciting developments in the past decade have brought this process so much further.

Dental imaging took a major leap forward at the beginning of the new millennium with a three-dimensional technology known as cone beam computed tomography (“tomo” – cut or slice; “graph” – picture). Tomography refers to the nature of the images that are generated or “computed.” With cone beam computed tomography (CBCT), dentists can get amazingly detailed 3-D views of the facial skeleton and teeth. However, like anything that exposes people (particularly children) to radiation, CBCT requires a risk-benefit calculation for each individual and should be used only when deemed clinically necessary.

You Can Treat what You Can See 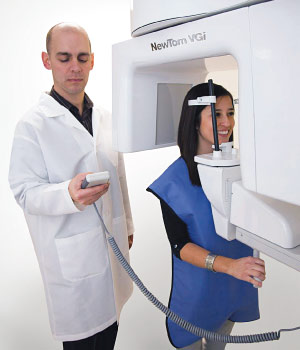 Traditional dental X-rays can capture two-dimensional (2-D or flat) views of hard tissues (bone and teeth, for example), while CBCT can image these anatomical structures with less distortion, more clarity, and unlimited perspectives of areas of interest. These details allow a doctor to make an accurate diagnosis and choice of treatment.

Just as light of different wavelengths (i.e. colors) is trapped on light sensitive film to make photographs (“photo” – light; “graph” – picture), so x-rays are used to produce radiographs (“radio” – x-radiation; “graph” – picture), images of the structures through which they pass. X-rays are used for medical evaluation because of their unique ability to pass through tissues of the body. When they encounter hard tissues, like bone or teeth, they have more difficultly penetrating them, and hence they appear white on a radiographic film, whereas they pass more easily through soft tissues like gums and cheeks, which look darker on radiographs. If a bone is damaged, as in a fracture, or a tooth is damaged by decay, the changes to their structure can be detected on a radiograph. The images are not in color, but in black, white and varying shades of grey reflecting the differences in density of the structures through which the x-rays pass. It takes learning, skill and experience to interpret radiographs in order to be able to use them appropriately and effectively.

A traditional full-mouth series of radiographs provides dentists with a 2-D look at the teeth and the surrounding bone.

Even traditional dental x-ray machines have been superseded by digital technology. Newer machines use much less x-ray dosage, and use digital sensors to capture images on computer screens, which can be viewed immediately rendering radiographic films a thing of the past.

Hundreds Of Images In One Scan

Enter cone beam imaging, so-called because CBCT machines are designed to project a cone-shaped beam of x-rays. CBCT, available in the USA since 2001, uses x-ray equipment that rotates around a person's head and takes multiple images (from 150 to 599 distinct views) that are digitally compiled into 3-D radiographic images. Scanning time ranges between only 5 and 40 seconds.

Cone beam imaging provides as many images as necessary to create an accurate 3-D image of the problem area.

When a patient receives a traditional full-mouth x-ray series (18-20 small films encompassing all the teeth), the information gleaned is limited by this 2-D flat photographic view, and there is still some distortion. By contrast, the information from the areas scanned with CBCT is stored digitally, and a multiplicity of images can be created from them, depending on what needs to be seen and studied. Medical CT scanners emit fan-shaped x-ray beams that gather data in multiple slices, and might expose a patient to as much as 10 times more radiation than a CBCT scan. By contrast, a single CBCT scan delivers a dose of radiation nearly equal to that of only a standard 20-film digital full-mouth x-ray series.

However, there can be great variation in the amount of radiation exposure received with CBCT. Radiation exposure varies across all manufacturers of CBCT machines due to two main factors: Unlike conventional dental x-ray machines, CBCT machines have additional settings to improve image quality and size of the image. The greater the detail or image quality required, the greater the radiation exposure. If more anatomical structures need to be seen, the scan becomes larger and therefore the radiation dosage may be larger. Depending on these settings, then, a CBCT scan delivers less radiation or close to the same level as a 20-film digital full-mouth series of x-rays and is up to 10 times less than a medical CT scan.

The Proof Of The Pudding

Here's how CBCTs create 3-D holographic type images: Imagine you have a cake, and you want to see inside it. Well, what you see depends on how you slice it — you can make large or small slices, or even create layers. And so it is with CBCT scanning, once the cone beam has scanned the subject, the information is digitally stored in a computer. It can then be reformed or “reformatted” to use x-ray jargon, into multiple different views (or slices), depending upon what one wants to study or look at, and all in three dimensions (3-D). In other words it's possible to view a particular slice of cake not only from anywhere outside, but also from anywhere inside it. Dentally speaking this allows visualization of anything from your whole skull, to a single jaw or jaw joint, down to a single root canal within a tooth — and more.

In fact, all the information you need can often be obtained from one scan, and reformatted for different uses, for different areas or specialties of dentistry.