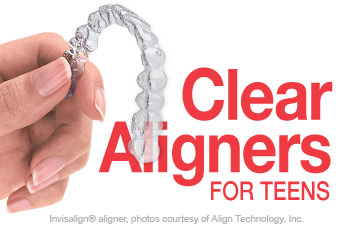 The 21st century has embraced technology like no other, and nowhere is it more evident than in the daily lives of our teens. In fact, technology has changed nearly every aspect of their lives.

Technology is even impacting orthodontics (“ortho” – straight; “dont” – teeth), which facilitates the change from “ugly ducklings” into maturing individuals with straight teeth and beautiful smiles. Traditionally, metal braces have been considered a necessary rite of passage, but the only choices adolescents had to express their individuality during orthodontic treatment were the selection of colored rubber bands and retainers. Today's teens often regard braces as restrictive, confining, and obstructive to their lifestyles. Diet modification, cosmetic detraction, mechanical irritation from the braces and wires themselves, and discomfort following adjustments that can last for days — all negatively impact a teen's capacity to function normally during an already difficult phase of life.

Clear aligners, introduced in the late nineties as an alternative to traditional braces, use a system of individual clear, removable “trays” to gradually straighten teeth. Aligning the teeth is accomplished with a series of these trays, referred to as aligners, each made of almost invisible polyurethane plastic that completely covers the teeth. Each aligner is slightly different than the previous one, and when worn for 20 to 22 hours per day for a two-week period before moving on to the next set in the series, will move the teeth into an improved, predetermined position.

The aligners are computer-generated based on photographs, models of your teen's teeth and bite, and radiographs (x-ray films) taken by an orthodontist, a dentist who has undergone specialized training in the study of growth and development of the teeth and jaws, and the treatment of malocclusion (“mal” – bad; “occlusion” – bite). Some general dentists who have undertaken some additional study may also perform limited orthodontic treatment.

The models are sent to a specialized laboratory for scanning from which a computer creates a 3D (three dimensional) image. The position of each tooth is manipulated individually on the computer screen into a new improved position as prescribed by the orthodontist until they are all in proper alignment. The customized software then simulates the movement of the teeth, in stages. The orthodontist reviews the simulation online and approves or modifies the treatment. Once approved, a plastic aligner is manufactured for each step of the movement, and the complete tray system is then sent to the orthodontist.

The most significant advantage is that the aligners can be taken out for eating and on a very limited basis for important social occasions. They can also be easily and thoroughly cleaned before and after use. They allow for ease of brushing and flossing to maintain excellent dental health, which is especially important during orthodontic tooth movement.

Attachments called buttons, made of a tooth-colored glass-like composite material that blend with the teeth, are sometimes temporarily bonded on to the teeth to provide additional leverage. They are necessary for moving severely rotated teeth in more complicated directions to align them. More traditionally, elastics (rubber bands) are also used to move the teeth forward or backwards within the jaws. Where crowding of teeth is mild, minor reshaping (by filing) to reduce the width of the teeth, a process also known as Interproximal Reduction (IPR) (“inter” – between; “proximal” – adjacent surfaces), can create enough space to straighten them with aligners. Aligners can also be used to close spaces between teeth or “re-approximate” them.

The last aligner in the sequence does not necessarily determine the final position of the teeth. If further refinement is necessary, more aligners can be ordered until the final result is satisfactory to both teen and doctor. The time necessary for clear aligner treatment will vary from 6 to 24 months, and will depend upon the amount of movement necessary, which in turn depends upon the degree of complexity of the malocclusion. After the regular aligner treatment is completed, retainers, either fixed to the teeth using small wires behind them, or removable retainers, composed of a similar plastic material, are usually required to be worn for a period of months or longer — the same as following traditional braces.