A consumer's guide to smart thirst-quenching 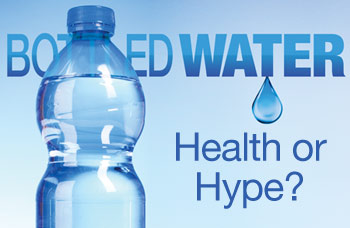 Water is essential to all living things. It's the reason there's life on our planet and not on others. And we Americans are lucky to live in a part of the world where good drinking water is abundant — and virtually free. According to the U.S. Environmental Protection Agency, the average cost for water supplied to a U.S. home in 2009 was about $2.00 for 1,000 gallons.

Yet many of us will pay that same amount, or a lot more, for a single bottle of commercially produced water that's not necessarily any better than tap water. In fact, bottled water often actually is tap water — sometimes purified, sometimes not. In many cases, there's just no way of knowing.

Americans are drinking more bottled water than ever — a staggering 85 million bottles every day. According to the Beverage Marketing Corporation, bottled water sales have more than quadrupled in the last 20 years, reaching 9 billion gallons in 2008. Every 27 hours, Americans consume enough bottled water to circle the entire equator with plastic bottles stacked end to end. (Note: This calculation assumes 8-inch bottles each containing 16.9 fluid ounces.) It's a multibillion-dollar industry that depends at least to some degree upon misleading marketing. Tap water is denigrated while bottled water is wrapped in labels depicting clear mountain springs — even if, as in one case, the water in the bottle comes from the municipal water supply of a Texas city barely above sea level.

Several years ago, we at the Environmental Working Group (EWG), a not-for-profit research and advocacy organization based in Washington, D.C., decided it was time to make the information about bottled water as transparent as the water itself.

A Thirst For Information

EWG's team of scientists, engineers, policy experts, lawyers and computer programmers has pored over government data, legal documents, scientific studies and our own laboratory tests to bring to light facts we believe you, as a consumer, have a right to know. While the bottled water industry promotes an image of purity, our comprehensive testing has revealed a surprising array of chemical contaminants in every bottled water brand analyzed. The quality of the samples in our 2008 survey varied significantly, with some bottled waters exposing consumers to some unsavory chemicals. 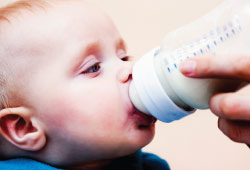 Here are some of the things we found in bottled water: disinfection byproducts; common urban wastewater pollutants such as caffeine and pharmaceuticals (acetaminophen, for example); heavy metals and minerals including arsenic, radioactive isotopes, and fertilizer residue (nitrate and ammonia). Four brands were also contaminated with bacteria.

It's important to note that these contaminants did not exceed legal limits (where such limits exist) and may also be found in some tap water; yet their very presence belies the industry's claims of purity, and their lack of disclosure interferes with consumers' ability to make informed decisions — particularly regarding what to offer their children. For example, some parents mix infant formula with bottled water in the belief that it is pure. Yet our research shows that not all water is fluoride-free. Fluoride is beneficial for the teeth of growing children and adults and many municipal water systems add it to water. However, even at optimal levels, many infants and children may receive more than the safe dose for their small body size. EWG therefore recommends that formula fed to infants be mixed with un-fluoridated water.

Bottled water is not a miracle product; it is subject to the same environmental contamination pressures as tap water. In fact, about half of the time, the tap is exactly where it's coming from. You can be forgiven for asking, how can this be?

The Illusion Of Transparency

There are two main reasons why bottled water is often less than advertised:

Not enough regulation. Bottled water is actually less regulated than tap water, with two different agencies responsible for monitoring what goes into, or more importantly, what stays out of these two types of water. The Environmental Protection Agency regulates tap water. Municipal water sources are required to make annual water quality testing data accessible to the public. Bottled water, regulated by the Food and Drug Administration, is not subject to such laws regarding the dissemination of test data. This leads us to point #2:

Not enough information. While we believe you have a right to know what exactly is inside that pricey bottle, many bottled-water companies don't agree.

They keep secret some or all of the answers to these basic questions:

Among the 10 best-selling brands, nine don't answer at least one of those questions, according to our 2011 study. Only one discloses its specific geographic water source and treatment method on the label. One company even went so far as to tell us that its testing data is “proprietary” information. In other words, what you put in your own body is none of your business. Amazing.

You can find out how various brands stacked up on transparency of information by viewing our latest Bottled Water Scorecard at www.ewg.org/bottled-water-2011-home. It shows that 8 of the 10 top-selling domestic brands earned a D or F for transparency. Overall, more than half of the 173 bottled water brands surveyed in 2010 flunked EWG's transparency test.

Some bottled water companies say they are being transparent, but they aren't. For example, in some instances a toll-free number was offered on the label that consumers were directed to call for water quality test results. But when we called, no one knew where that information could be found.

Given the industry's widespread refusal to make available data to support its claims of superiority, consumer confidence in the purity of bottled water is simply not justified. 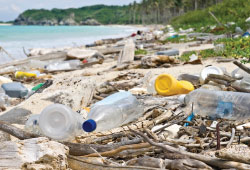 It takes an estimated 2,000 times more energy to produce bottled water than to produce an equivalent amount of tap water. Bottled water production and transportation for the U.S. market consumes more than 30 million barrels of oil each year and produces as much carbon dioxide as 2 million cars.

Plastic water bottles are the fastest growing form of municipal solid waste in the United States. Each year more than 4 billion pounds of PET (polyethylene terephthalate) plastic bottles end up in landfills or as roadside litter. Disposing of plastic water bottle waste, for example, costs cities nationwide an estimated $70 million in landfill tipping fees each year.

It's also worth noting that some chemicals in plastic bottles can leach into the water itself, especially when the bottles are left in the sun. As companies are not required to disclose what chemicals they use in the production of these bottles, the health effects are unclear. There is a potentially harmful chemical called bisphenol-A (BPA), which is used to manufacture polycarbonate plastics and epoxy resins. Low-level exposure to BPA comes from eating food or drinking water stored in containers that have this chemical. This type of exposure has been shown to affect the reproductive systems of laboratory animals. More research is needed to understand the human health effects of BPA exposure, which are unknown.