The Gift of Wisdom 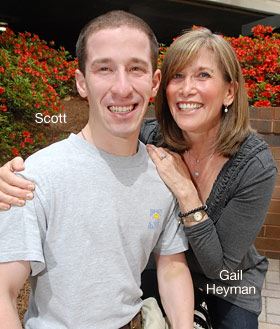 Recently my family had the opportunity to aid research into the causes and treatment of intellectual disabilities and autism in a surprising way: By donating my 31-year-old son's wisdom teeth to scientists studying fragile X syndrome (FXS). I would like to share this story with your readers, who have already learned about the value of stem cells, and also the challenges of dental care for children with special needs, in prior issues of Dear Doctor magazine.

My son Scott was 9 when he was diagnosed with FXS, an inherited form of autism that affects approximately 1 in 3,600 boys and 1 in 4,000 to 6,000 girls. Scott was developmentally delayed both academically and socially. He did not speak until he was 4 and couldn't learn to read. He had difficulty expressing himself and making eye contact, and any changes to his routine could overwhelm him. In the beginning I thought he had a learning disability, or maybe even just a vision or hearing problem.

Scott's diagnosis of FXS was devastating to our family at first. It was almost like a fatal blow to our dreams for this young child and what he would someday accomplish. Then I realized it was an opportunity for Scott to develop in his own special way. Along with Scott's father, brother and sister, I found that when you have a family that works together to understand each other's strengths and needs, it's a more rewarding life than one can imagine.

This year, Scott needed to have his wisdom teeth extracted. Dental visits have always been challenging for him; lying back in the chair, opening his mouth, and hearing the humming of the instruments can all produce a sensory overload that is difficult to bear. However, because I am not only the mother of a child with special needs but also a dental hygienist, I was determined to make these visits fun for him. So I introduced him to dentistry very gradually: I took him as a young child to the dentist's office just to meet the staff one day; to ride the chair up and down on another day; and finally to have treatment. He became comfortable in this environment and a cooperative patient. (For more information on dental care for children with special needs, please see “Managing Tooth Decay in Children with Chronic Diseases,” Vol. 5, Issue 2.)

Because of my own dental background, I was made aware that wisdom teeth are a source of stem cells, which can develop into many different types of cells in the body. Scientists are using stem cells to study human development and even to generate new human tissue to repair damaged or diseased areas of the body, which is why these remarkable cells offer exciting research opportunities that will potentially benefit Scott and others with disabilities.

So before Scott's wisdom tooth surgery, I contacted Stephen Warren from the Department of Human Genetics at Emory University in Atlanta about donating Scott's wisdom teeth to fragile X research. Dr. Warren, who identified the fragile X gene in 1991, said he would love to use Scott's dental stem cells for research and would send a courier to rush Scott's teeth to the lab as soon as they were extracted.

The only hitch in the procedure was Scott's temporary reluctance to give up the teeth, rather than leave them under his pillow for the Tooth Fairy. In fact, it took a long-distance phone call from his brother, who was traveling in South America, to convince Scott that if the Tooth Fairy received a letter from Scott's oral surgeon, Dr. Abtin Shahriari at Goldstein, Garber & Salama, she would understand completely the importance of giving back to science. Dr. Shahriari wrote the letter, and the Tooth Fairy responded with a note of her own; Scott often keeps it in his pocket.

It's hard to say exactly what Scott understands about his gift to science. While he knows he is different, he doesn't think different is bad. He does like to be helpful, and I think he understands that by allowing scientists to study his teeth, he is helping people in an important way.

As a dental hygienist, I am so amazed by the promise of stem cell research; and as a mother, I have been given a new, tangible hope for my son's future. Perhaps Scott's gift will someday lead to a form of targeted drug therapy that can make life easier for him and future children born with FXS. The more we know about autism, the better we'll be able to educate and socialize those who are impaired.

I have always believed that everyone has a responsibility to give back; it's the rent we pay for our place in a free and fortunate society. Scott has made a significant contribution, and the Tooth Fairy isn't the only one who views him as a champion.

Gail Goldstein Heyman has been a dental hygienist at Goldstein, Garber and Salama for 25 years. She is president and co-founder of the Fragile X Association of Georgia. Gail Heyman can be e-mailed at gheyman@goldsteingarber.com.