Satisfying and Protecting Your Sweet Tooth 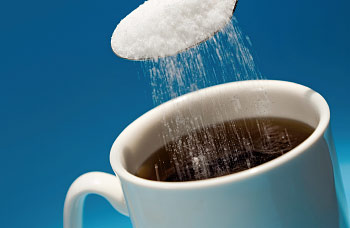 Do artificial sweeteners have a role in health and diet? They certainly seem to be everywhere today, from chewing gum to the ubiquitous packets of yellow, blue, and pink found in coffee shops nationwide. With popular media continually portraying sugar as the villain in a national battle against obesity, terms like “added sugar” and “high fructose corn syrup” are increasingly viewed by consumers with skepticism and even aversion. Add the fact that diets high in refined carbohydrates can predispose individuals to a myriad of health issues — dental caries (tooth decay), high triglycerides (cholesterol and other fats), and rapid swings in blood sugar being only a few — and it's understandable why sugar seems to be the current Nutrition Enemy Number One.

Today's selection of artificial sweeteners helps satisfy a desire for a sweet taste without any potential negative consequences. A preference for sweet tastes is inherent in humans, with sweet foods triggering the brain to feel satisfied and happy. Given that a “sweet tooth” is at least in part biological, it's no wonder that American consumers are continually seeking ways to get their sugar fix while avoiding overconsumption.

What's Out There: An Overview Of Sweeteners

Currently, the Food and Drug Administration (FDA) has approved six artificial sweeteners: acesulfame K, saccharin, aspartame, neotame, sucralose, and rebaudioside A. All of these products are intensely sweet chemicals, which range from hundreds to thousands of times sweeter than table sugar. With the exception of rebaudioside A, they are all man-made compounds. Calories from any of these sweeteners are near negligible because only very small amounts are needed and the body excretes most of what is consumed.

Acesulfame K, marketed under trade names Sunett and Sweet One, is most commonly used in combination with other artificial sweeteners due to a bitter aftertaste.

Saccharin, one of the most well-recognized and widely used artificial sweeteners, is available under a variety of trade names, with Sweet'N Low and Sugar Twin being the most common. Saccharin is used in sugar-free and low-calorie foods ranging from beverages and cookies to dairy products.

Aspartame is also well recognized, being the “blue packet” counterpart to saccharin's “pink packet.” It is commercially available as Equal or NutraSweet. Aspartame is unsuitable for cooking or baked goods because its structure degrades at high temperatures. Although aspartame is safe for the general population, in people with a rare genetic condition called phenylketonuria, aspartame cannot be properly processed by the body. Products containing aspartame must carry an FDA warning label by law stating, “Phenylketonurics: Contains Phenylalanine.”

Neotame is a relative newcomer to the artificial sweetener market. Produced by the makers of NutraSweet, neotame is derived from aspartame and has a similar taste but is metabolized slightly differently in the body. As a result, neotame-containing products do not need to carry the same FDA warning as those with aspartame.

Sucralose, widely marketed under the name Splenda, has been touted as having the most natural flavor profile of any artificial sweetener and is currently the most popular option. Early marketing campaigns utilized the slogan “Made from sugar so it tastes like sugar”; sucralose is made by chemically altering table sugar so that the body can't process it. Lawsuits eventually forced the company to repeal the message, though. Sucralose is broadly used in sugar-free products, including the well-known beverage Diet Coke. It is also stable at high temperatures and varying pH levels (of acidity and alkalinity), making it well suited for cooking and baking.